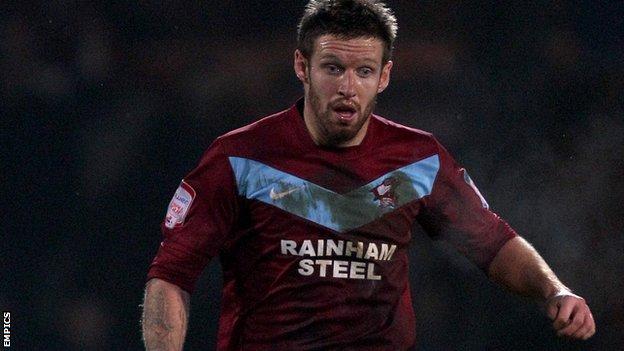 Scunthorpe skipper Paul Reid has admitted his side face a huge challenge to retain their League One status.

The Iron lost to Doncaster on Saturday and are one point behind 20th-placed Oldham, having played twice more.

He told BBC Radio Humberside: "It was already going to be a real tough ask and it's now made it even tougher.

"We set ourselves a target of around 50 points and to achieve that now we need to win four of our last seven games. I doubt we've done that all season."

He added: "Saturday just wasn't good enough and I'm fuming about the performance and the result.

"We had a gameplan and we weren't good enough to execute it. We gave ourselves a mountain to climb."

Brian Laws' side recorded three successive home wins in February to climb five points clear of the bottom four but have picked up only three points from their following seven matches.

Reid, 31, has called on the club's fans to support them as they look to avoid dropping to the bottom tier.

"I would just plead with them to get behind us," he said.

"There are things that have gone on this season that I'm certainly not happy with and they need addressing, but now isn't the time.

"All we can do now is be together until the end and hope to salvage the season."