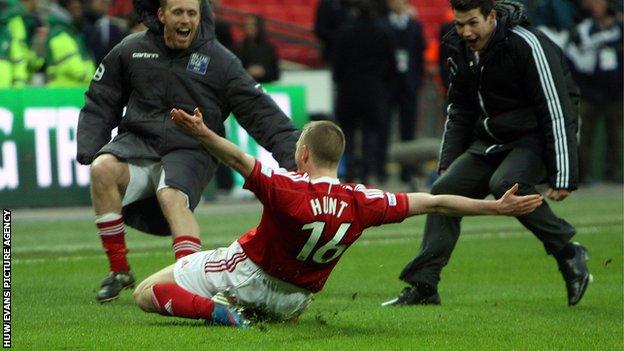 Wrexham midfielder Johnny Hunt says the club's FA Trophy win will be irrelevant if they fail to secure promotion this season.

Wrexham became the first Welsh club to lift the FA Trophy by beating Grimsby 4-1 in a penalty shootout.

The Dragons are currently third in the Blue Square Bet Premier, five points off top spot with two games in hand.

"We said before the final the biggest goal is to get promoted and that's what we still want to do," said Hunt.

"We want to get out of the league. At the end of the season if you say we are still in the Blue Square Premier but we won a trophy - it's not really [a consolation].

"We want to win the league but if we have to come back to Wembley [in the play-offs] we will do it all again.

"Winning the league is the first priority but if we get through the play-offs [the fans will be happy]."

Hunt struck home the winning penalty in the shootout against Grimsby and said he was delighted for the fans - with some 18,000 making the trip to Wembley.

"That win is for them and I hope everyone enjoyed their day out," said the 22-year-old midfielder.

"It was great to put the smiles on the fans' faces. Hopefully we can get out of the league and make it a massive party at the end of the season."

But Hunt said he had not practised penalties ahead of the final.

"I was thinking I didn't even practice a penalty in training. Normally I would do," he admitted.

"We had a few calm penalty takers. Normally in training we are not the best at penalties, any of us!

"But under pressure we proved we can do it."