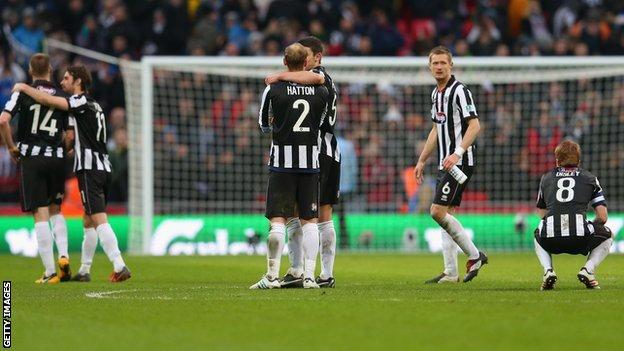 Grimsby Town joint-boss Rob Scott was proud of his side's performance in their FA Trophy final penalty shoot-out defeat by Wrexham on Sunday.

Andy Cook gave the Mariners the lead before Kevin Thornton levelled from the spot to send the game to extra time and then penalty kicks.

Scott told BBC Radio Humberside: "I said to the players we're proud of their efforts and desire.

"On the back of four defeats we came here and ran a very good side close."

He added: "I thought we scored our goal from the best move of the game and then we just sat off too deep and that is what this place does to you.

"We couldn't fault their attitude and work-rate but if I'm honest then we needed to be better on the ball. We're looking a little bit jaded at the moment.

"There's no getting away from the fact that some of our quality players aren't playing as well as they were two months ago."

They travel to Hartlepool's Victoria Park to face Gateshead on Tuesday and Scott admitted that they are unlikely to gain automatic promotion.

"It looks to be very difficult now. Whether this [the FA Trophy] was a distraction, we'll never know," he said.

"We need to keep battling and working hard. We'll use this defeat as a motivating factor for trying to get back here [Wembley]."