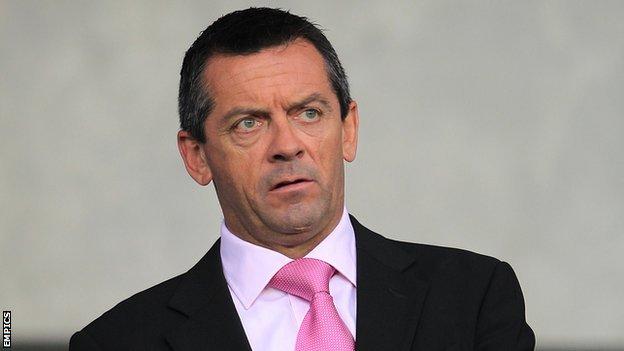 "I'm delighted to have been given the opportunity here at Southend and it's a challenge I'm really looking forward to," he told the club website.

He will take charge of Friday's League Two trip to Bradford City.

However, Sturrock will lead out the team in the Johnstone's Paint Trophy final against Crewe at Wembley on 7 April.

The Scot, 56, was relieved of his duties by chairman Ron Martin on Sunday, but told TalkSport he had already been preparing to leave the club when his contract expires at the end of the season.

Sturrock's assistant Graham Coughlan will continue in his role.

Brown, who led Hull City to the Premier League in 2008, will be given the short-term task of claiming a play-off place this season and has seven games to close a six-point gap on the top seven.

"We've got seven league games between now and the end of the season, hopefully we can put a winning run together and give ourselves a chance of reaching the play-offs," he said.

"We've got a few days of training between now and the game against Bradford that will give me a chance to take a look at the players.

We've got seven league games between now and the end of the season, hopefully we can put a winning run together and give ourselves a chance of reaching the play-offs

"The Easter period is always tough because you play twice in such a short space of time, but it's a good opportunity to pick up six points and get that winning run started."

Brown, a former Bolton and Hartlepool defender, was interviewed by Coventry City before the job was given to Mark Robins earlier this season and was also close to being appointed as first-team coach by Hartlepool United last November before talks with the board broke down.

Derby County gave Brown his first chance as manager in 2005 but it was at Hull where he achieved most success, leading them from the lower reaches of the Championship into the Premier League within 18 months.