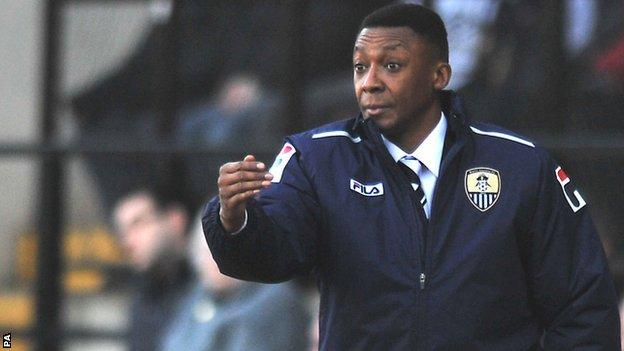 Notts County chief executive Jim Rodwell says caretaker manager Chris Kiwomya is in "pole position" to get the job on a permanent basis.

Kiwomya took over after Keith Curle's sacking in February and has since been appointed until the end of the season.

The 43-year-old has won three, lost two and drawn six of his 11 games and Notts are seven points off the League One play-offs with six games remaining.

I definitely want the job. It's a good club that wants to go forward and I want to be a part of that

Notts drew 0-0 with promotion hopefuls Swindon Town on Saturday and still have an outside chance of making the play-offs.

Rodwell, who said the final decision on the new boss will be made before the end of the season, added. "I don't think he can be faulted since he got the job.

"I don't think Chris could have done a lot more. He has gone about his business properly, and has been diligent.

"We need to sit down with Chris and iron a few things out I think."

Kiwomya, who was County's development squad boss before succeeding Curle, said: "Pole position does not mean that you have got it.

"I'm happy but if we don't play well between now and the end of the season then that soon changes.

"But it's nice to hear that. I definitely want the job. It's a good club that wants to go forward and I want to be a part of that."