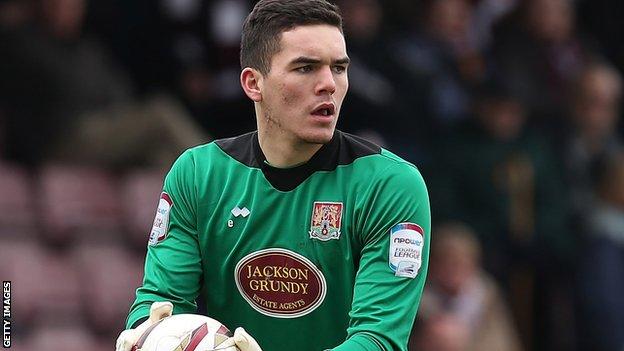 Northampton Town coach Tim Flowers has praised the "fantastic" job goalkeeper Lee Nicholls has done for the side since joining on loan from Wigan.

The 20-year-old has kept 14 clean sheets in 41 appearances this season.

"Far be it from me to tell Wigan what to do, but he'd be around my squad," added ex-England goalkeeper Flowers.

"All he wants to do is learn and work. He's a Rolls Royce of an athlete."

Nicholls signed a new contract with the Latics last November, which will keep him at the DW Stadium until 2015.

"Wigan have done us a turn letting him come here and it's been brilliant for him and Wigan that he's here," said Flowers.

"He's learning a lot more playing for us because 10 games for us is worth 100 in those Under-21 development squads they play in.

"Can he come back next season? I'm sure [manager] Aidy Boothroyd will be having a chat with [Wigan boss] Roberto Martinez and the coaches there."

The Cobblers lie fourth in League Two after their ninth consecutive home win on Saturday, a game in which Nicholls made key saves.

"The boys dug in during the second half, pushed themselves and we've got the clean sheet we needed," said Nicholls.

"We've got it in our heads that no-one will come to Sixfields and beat us. But we all know that we need to improve our away record, and with a few big away games coming up, we've got a chance to put it right.

"We've set ourselves a target to get automatic promotion but we've got to keep going and keep working hard."