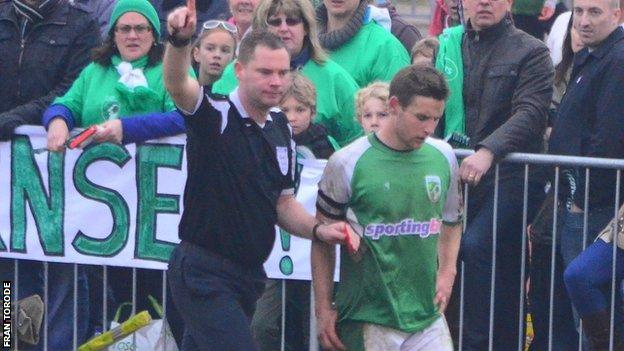 Guernsey FC captain Sam Cochrane will be available for the club's FA Vase semi-final second leg tie at Spennymoor Town, despite being sent off.

The 27-year-old defender's suspension does not begin until mid-April meaning he will miss the games with Farnham, Raynes Park Vale and Hanworth Villa.

"It was rash from his point of view and caused us some problems in the end as we were chasing the game with 10 men."

The sending off was Cochrane's first in senior football and the Guernsey skipper apologised on Twitter.

"Disappointed in myself, a split second decision to swing an arm will probably see me miss three league fixtures in April," he posted.

But Cochrane's ban is for a number of games and not a fixed period of time.

Had the ban suspension been carried out under last season's rules, he would have been suspended for 35 days, meaning he would miss 14 matches including Guernsey FC's congested run-in to the Combined Counties League season and the Muratti with Jersey.