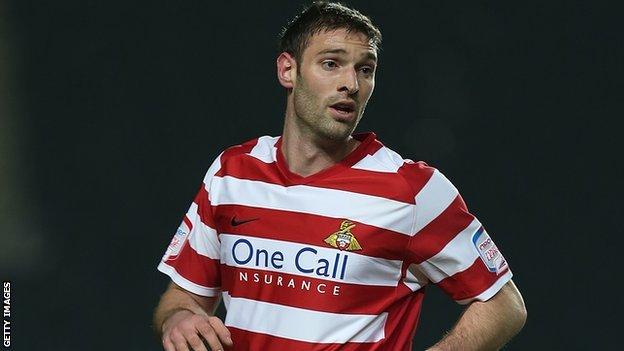 Rovers came closest to going in front before half-time when visiting defender Darren Ward cleared off the line after Aden Flint sliced a David Cotterill cross towards his own net.

Robins keeper Wes Foderingham was forced into a fine save from Chris Brown's header.

But McCombe won it when he met Cotterill's corner at the back post.

Brian Flynn's side, who also went close when Foderingham tipped a Cotterill free-kick over the bar, are now five points clear of second-placed Bournemouth.

Swindon would have moved up to second themselves with a win but rarely threatened and remain fourth, two points adrift of automatic promotion.

"It was a controlled, proper performance from every department.

"From start to finish what we asked for what we worked on happened out there.

"I'm really pleased for the fans, because they can go home happy with a really good performance.

"The other teams around us will have watched that and seen how powerful we are."

"I felt we deserved at least a draw, but they had more possession and more chances.

"We seemed quite content just to try and keep them at bay.

"It's really disappointing for us and for the travelling support, who were tremendous once again.

"Now we have to get our heads down and get stuck in to the last five games."