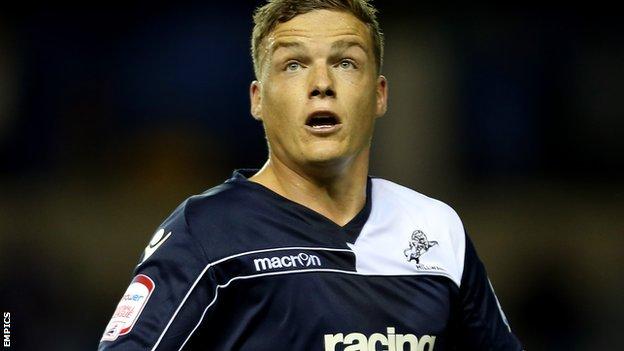 Millwall and Ipswich Town played out a draw as both clubs gained a vital point in their battles to avoid relegation.

The visitors also had chances with David Forde saving from Luke Hyam's back-post volley and Michael Chopra heading over from six yards out.

Millwall nearly got a late winner but Shane Lowry's free-kick hit the post.

The result leaves Ipswich, who started the season with only one win in their first 13 league matches, in 17th position, three points clear of the Championship relegation zone.

Town are one point behind Millwall in 14th, although the Lions have at least one game in hand on every other side in the division.

Trotter began his career at Portman Road and nearly scored against his former club after only two minutes but his 25-yard volley went narrowly off target.

The Lions enjoyed the best of the first half and they thought they had taken the lead when Keogh converted from Jermaine Easter's left-wing cross, only for the goal to be ruled out for offside.

Keogh also hit the top of the crossbar with a deep cross as the FA Cup semi-finalists aimed to claim their fourth successive victory.

But Ipswich, themselves unbeaten in three games, came back into the match and nearly took a bizarre lead when Forde's poor clearance fell to Hyam, whose 50-yard lob was headed clear by Millwall defender Mark Beevers.

Town also had further opportunities but Forde blocked Hyam's volley from Frank Nouble's cross and Chopra, who has only scored one league goal in 2013, headed over following Aaron Cresswell's inswinging corner.

Ipswich have scored the least goals of any Championship side, but have now only conceded one goal in seven matches, while Millwall kept their fifth successive clean sheet.

However, there was nearly a late twist as Lowry's left-footed free-kick hit the post, before Easter missed a good chance to score an injury-time winner but fired over from close range.

"I felt that we had the better of the chances - Ipswich had a couple but we had more that were clear-cut.

"I felt today that we generally lacked width. Early in the game even though we passed the ball well, we lacked players that could go past people.

"I probably should have introduced Liam Feeney earlier on because he did have a positive effect when he came on."

"It wasn't a good game - it was pretty poor with two teams in a relegation scrap, where we've been all season long and I think it's probably dawning on Millwall as well now.

"They're one point better off than us and the other teams around us have won so it's nervy.

"Easter hasn't made or broken us - if anything it's made us a bit worse off despite getting four points because the league's bonkers, just crazy."