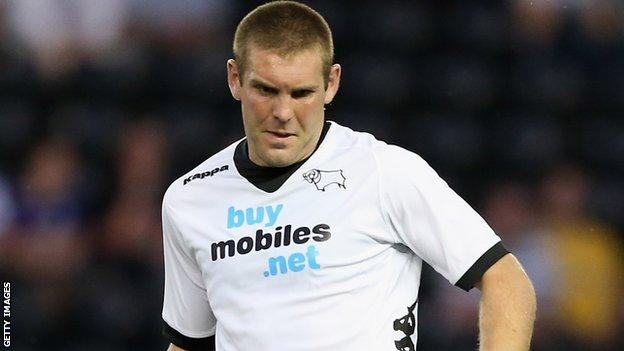 Substitute Ross McCormack put Leeds ahead with a thumping 20-yard shot just 10 minutes after coming on.

And Buxton met Ben Davies' corner at the near post to lift Derby to eighth.

Leeds also harboured ambitions of making a late bid for the top six, but those appear to be over after the Elland Road side failed to register their first victory over the Rams since February 2006.

While Derby are six points adrift of the play-off spots with six games left to play, defeat leaves 12th-placed Leeds just five points ahead of the bottom three - highlighting the unpredictable and compact nature of the Championship.

Whites boss Neil Warnock will be furious with the manner in which his side gifted their opponents a way back into the game within six minutes of McCormack's opener.

Central defender Jason Pearce, recalled to the side following Tom Lees' dismissal against Ipswich on Saturday, carelessly bundled into the back of Rams forward Chris Martin, leaving referee Roger East with no option other than to point to the penalty spot.

Sammon's spot-kick struck the inside of Paddy Kenny's right-hand post but the alert Coutts gambled quicker than the Leeds defence to slot home the rebound.

Momentum swung in favour of the galvanised visitors following the equaliser and, moments after Kenny beat away Davies' free-kick, they were rewarded as Buxton climbed highest to send a powerful header into the roof of the Leeds net.

Another great result against Leeds. Nine in a row against them is both amazing and bizarre

The winner capped an eventful second-half as the game burst into life following a tepid first-half which was devoid of attacking quality.

Former Rams midfielder Paul Green, who scored in the reverse fixture against his former club, rattled the crossbar with a 20-yard drive in the only noteworthy action of the first half.

Warnock handed a first-team debut to 18-year-old midfielder Chris Dawson and the youngster impressed for the home side, orchestrating the move which led to Green's chance, before making way for McCormack just before the hour mark.

The Scotland international made an instant impact by lashing a neat lay-off by Green past stranded Rams goalkeeper Frank Fielding.

But it was Nigel Clough's men who were left celebrating as Buxton clinched their third successive victory following wins against Leicester and Bristol City.

Clough said: "We showed immense character but we should have done a bit better in the first half.

"We were comfortable but we should have done more to get a goal in that spell. It took Leeds' goal to get us going.

"It was a great save by our keeper Frank Fielding from Sam Byram at 1-1. Frank hasn't had much to do in the last couple of weeks since he has come back in but that save was vital and I thought if anyone was going to score in the last 15 minutes or so it was us.

"I don't feel we are safe yet, but we want to finish on a high and get as many wins as we can."