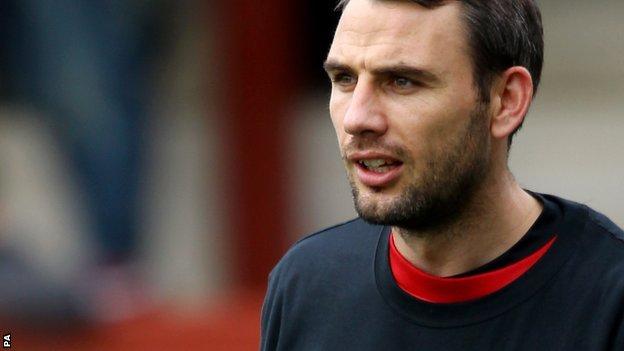 Substitute Barry Corr's late header earned Southend United a point against Fleetwood Town but the draw did little for either side's play-off chances.

Alan Goodall's close-range header put the visitors ahead on two minutes and they dominated until the closing stages against a lacklustre Blues side.

Gareth Evans should have made it 2-0 from the spot after a Ryan Cresswell handball but Paul Smith saved.

And Corr made the Cod Army pay when he headed in Britt Assombalonga's cross.

Southend could not muster a shot before the break but a lively finale sparked by Corr's introduction could easily have seen them take all three points and earn Phil Brown a first victory as manager.

Mark Laird had a great chance but his header was easily saved and the Blues are now six points adrift of the League Two play-off places with just five games remaining.

Fleetwood are three points behind Exeter, who occupy the final play-off position, but have played a game more.

"I was disappointed to tell you the truth.

"What the players gave me on Friday (2-2 at Bradford), I thought if we produce the same kind of form, commitment and attitude, we'd come away with our first win under my tenure.

"I wanted a few [players] to put a marker down for the JPT final at Wembley, one or two did on Friday, but today we didn't do enough of that."