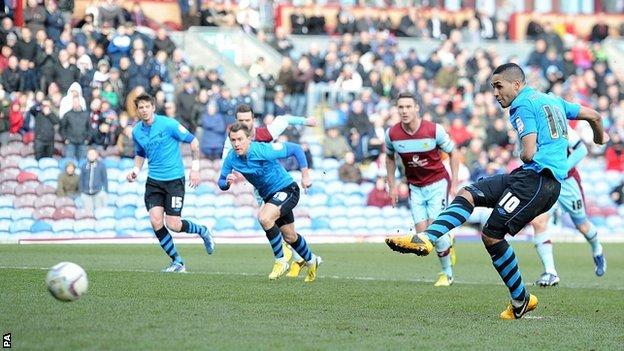 A penalty from Lewis McGugan in the last-minute of stoppage time salvaged a point for Championship play-off hopefuls Nottingham Forest at Burnley.

After a tight first period, Burnley took the lead midway through the second half through a deflected shot from Junior Stanislas.

Forest looked doomed to a first loss under Billy Davies until Kevin Long brought down Henri Lansbury in the box.

The draw keeps Forest in fifth, three points clear of seventh-placed Leicester with six games remaining in the race for the play-off spots.

Forest striker Billy Sharp had the first opportunity of a dreary encounter when his header from McGugan's cross was tipped over by Grant in the Burnley goal.

At the other end, Ross Wallace slid the ball through to Charlie Austin but the former Swindon striker blazed over from the edge of the box.

The home side were denied a penalty when Chilean full-back Gonzalo Jara collided with Austin as he looked to convert a Kieran Trippier cross before Stanislas unleashed a shot which was well saved by Karl Darlow.

A tedious second half sprung to life when Stanislas gave the home side the lead. Joseph Mills crossed for the former West Ham winger, whose shot cannoned off Chris Cohen on its way past Darlow.

But Burnley looked set to cling on to the points until Long bundled into Lansbury to give present McGugan with the opportunity to slot home from the spot.

"I feel sorry for our fans, because yet again they've witnessed an incredible situation where we can't just win against an opposition, we've got to beat everything else.

"I'm disappointed in the whole referee's performance today and I'm sick of talking about it because I shouldn't have to. But it's not the first time as we know; it's been a constant issue since I've been at this football club. I don't know what it is, but that isn't good enough today.

"I've lost count of the issues today. The timing issue at the end inevitably affects the game. It probably is a penalty but that's not the point. The game's dead, it's over, we've won."

"The energy and the passion we showed is not what we expect from our team, but I was forced to make changes.

"I did feel confident that we'd get a goal, and in the end it's a fantastic point but a terrible, terrible spectacle."