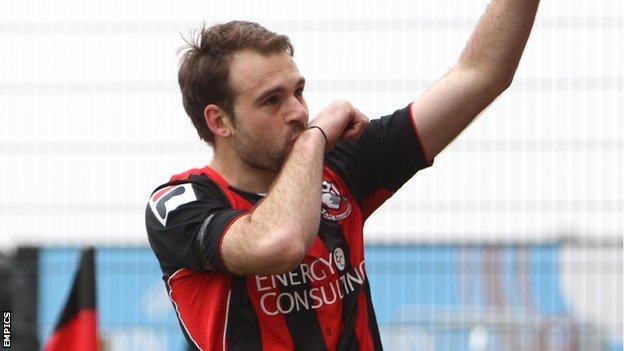 Bournemouth tightened their grip on second place in League One by edging out relegation-threatened Scunthorpe.

The Cherries went ahead when Marc Pugh crossed from the left and Matt Tubbs's header back across goal was met on the volley by Brett Pitman, who found the net for the fifth successive game.

Eddie Howe's side are now three points clear of third-placed Brentford, who but have two games in hand on the Cherries, while Scunthorpe drop into the bottom four after rivals Oldham drew with Colchester.

"It's always edgy at 1-0 but I thought we were well in control of the game, especially in the first half.

"I can't really remember Scunthorpe having any chances or Ryan [Allsop, Bournemouth keeper] being called into too much action. I thought we were quite comfortable but we desperately wanted the second goal just to see the game through a little bit more relaxed.

"We were very controlled, we were brave as always, players were rotating positions and we looked like a really good football team.

"I think we've seen the players act really professionally. The lads have grown from experiences this season and I'm delighted with the way we defended today."

"We created a couple of good opportunities, especially in the second half, when I was expecting to at least work the goalkeeper.

"We worked ever so hard to get in a good position particularly Mark Duffy, who's gone through and caused them problems, and opened the goal wide open and missed the target.

"When you look at the overall game we would have only needed that to get us back into the game and get us a point.

"There's a fighting spirit amongst us and we'll give it our best shot."