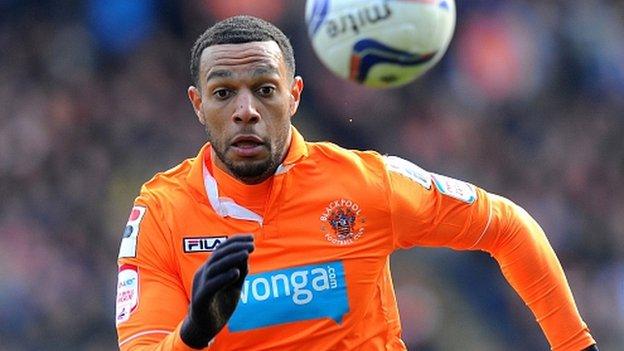 Blackpool midfielder Barry Ferguson was sent off three minutes before half-time for a second bookable offence.

Palace took control but could not turn possession into goals as Glenn Murray and Wilfried Zaha both wasted chances.

A win would have taken Palace to within three points of second-placed Hull, but instead their worrying late-season slump continued.

The victory moves Blackpool up to 15th, but they are still only three points clear of the relegation zone.

Palace were reliant on Speroni in the opening exchanges as he twice denied home striker Nathan Delfouneso.

But the hosts were rocked three minutes before the break when Ferguson was shown a second yellow card for a foul on Yannick Bolasie.

Murray had Palace's first chance of the second half, but he could not make a firm contact with his header from Jonathan Parr's cross.

Zaha then drifted a ball in towards Murray, who fired into the side-netting from a narrow angle.

Palace were made to pay for wasting so many chances as Phillips collected the ball and looped a 20-yard effort home to clinch Blackpool's first home win under Paul Ince.

"I felt it was a harsh decision. I felt the first yellow card was right but the second one, [Yannick] Bolasie has knocked it 20 yards past him and is never going to get it.

"He made a meal of it. You need to show some common sense. The game's getting too soft. I felt the referee got that badly wrong.

"We've got a great bunch of lads and they dug in and got their just deserts as far as I'm concerned.

"We're not making things happen for ourselves. It is really important at this time of the season that we all stick together.

"It's the worst run we've had since the start of the season and it's the wrong time to do it. We've just got to dust ourselves off, get up and get on with it."