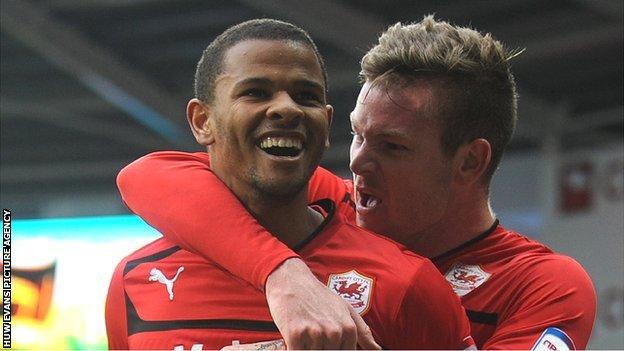 Cardiff City settled a little of their promotion anxiety with an important win against strugglers Blackburn Rovers.

Cardiff had seen their lead at the top of the table trimmed to four points on Saturday after but had Wales striker Craig Bellamy back in the starting line-up.

Bluebirds manager Malky Mackay made four other changes to freshen up his side, including leaving midfielder Whittingham on the bench.

But relegation-threatened Rovers were boosted by the return of David Bentley from a knee injury to start in midfield alongside Danny Murphy, while Colin Kazim-Richards started in attack.

Cardiff began the day needing 14 points from their remaining eight games to clinch promotion to the Premier League, but had not won at the City Stadium since 16 February.

The home side set about their visitors with real purpose and an early chance came when Rovers goalkeeper Jake Kean flapped at a corner, but Campbell just failed to connect properly.

Leon Best did have the ball in the Cardiff net, but had strayed off-side just before being picked out superbly by Pedersen.

With that warning, Cardiff redoubled their efforts and Campbell spun to crash a half-volley off the Rovers bar before Jordan Mutch saw his shot clawed away by Kean.

The Blackburn keeper was soon in action again to deny Bellamy, who then saw his follow-up shot blocked on the line.

Rovers' resistance was finally broken five minutes before half-time when Campbell was left unmarked on the back post at a corner to send a low header into the net. 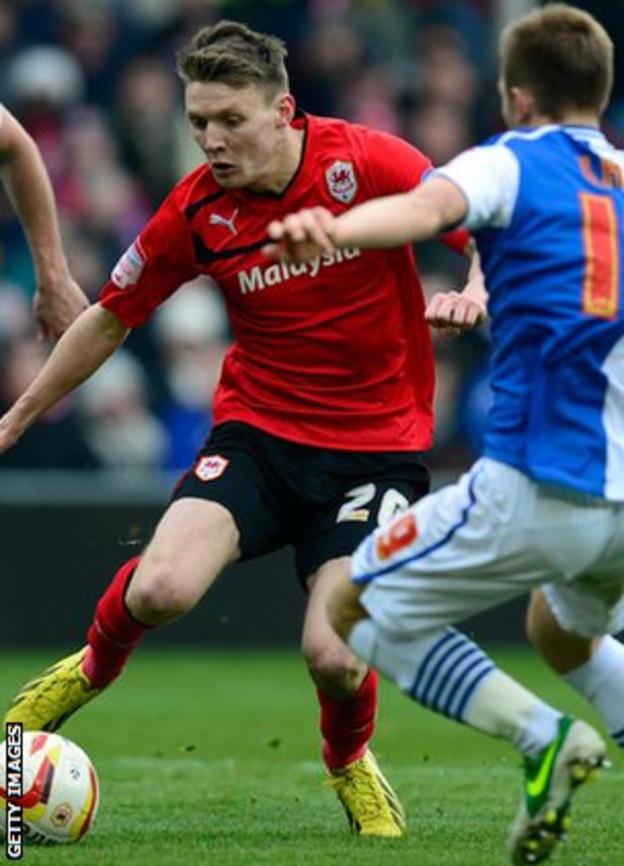 The visitors suffered another blow soon after the restart when keeper Kean had to be replaced by Grzegorz Sandomierski after going down in a heap.

Kim Bo-Kyung had been an impressive driving force from the Cardiff midfield and only a fine block by Murphy prevented the South Korean from doubling the home lead.

David Marshall had been largely untroubled in the Cardiff goal, but had to back-peddle sharply as Pedersen took a quick long-range free-kick.

However, Cardiff were soon threatening again - and Sandomierski had to get down smartly to push a Kim shot away before pulling off a fantastic reaction save to deny Ben Turner from eight yards.

Four minutes from time Cardiff at last claimed the cushion of a second goal their dominance warranted as Mason held his run before a jinking turn gave him space to shoot home.

With the three points safe, Whittingham gave the scoreline a glossy look from the penalty spot in injury time after Scott Dann had brought down the lively Mason.

The result leaves Blackburn in deep trouble, only above the relegation zone on goal difference, and facing a crucial game at rival strugglers Sheffield Wednesday on 6 April.

Cardiff, meanwhile, have re-established some welcome breathing space before Saturday's trip to third-placed Watford - although the Hornets must go to second-placed Hull City on Tuesday night.

"I thought our team were exceptional today. Anyone that came to the stadium to watch us saw a fantastic performance.

"We were playing against a very experienced team - their front six were incredibly experienced - and we knew that if we didn't press them from the first minute we would allow them to show their qualities.

"We ended up with 18 shots on target in the first half before Fraizer got the goal, so I'm delighted to dominate the way we did, keep a clean sheet and eventually come out with the three goals."

"The club were relegated from the Premier League last season so we know what it feels like. We don't want it to happen again this time.

"My overriding emotion is one of disappointment. We withstood an enormous amount of pressure in the first half, but I thought the first goal was a foul on the goalkeeper.

"We are not getting those decisions at the moment."