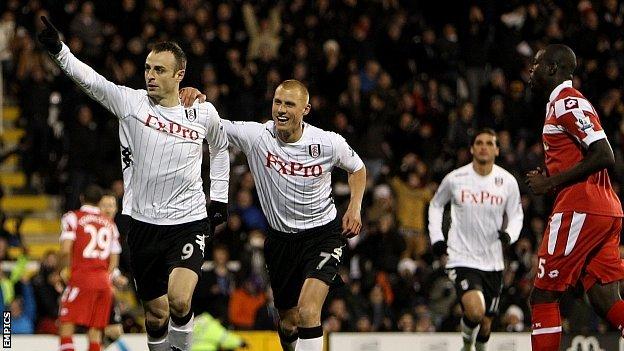 QPR's hopes of top-flight survival are hanging by a thread after a damaging defeat by a Dimitar Berbatov-inspired Fulham in a riveting encounter.

Adel Taarabt gave QPR hope with a low strike before half-time and Loic Remy reduced the deficit to a single goal moments after missing a penalty.

Fulham's Steve Sidwell was sent off but QPR were unable to conjure a late goal.

"You can't play like QPR did in the first half in the Premier League and expect to stay in the division. From Fulham's point of view they were excellent. Their fans are buzzing, they think they've sent their local rivals into the Championship. QPR will have to rely on teams around them having an absolute nightmare from now on."

In fact, when faced with 10 men, QPR's efforts smacked more of desperation than precision as they slid to a defeat which leaves them seven points adrift of safety with seven games remaining.

It is a position from which no team in Premier League history has survived the drop and one which may leave even manager Harry Redknapp privately admitting that the game is up.

Samba's signing for £12.5m from Anzhi Makhachkala on the last day of the January transfer window was supposed to provide QPR with the type of defensive solidity required to get results in the top flight. Instead, he was guilty of two elementary mistakes which left his team staring into the mire.

Ashkan Dejagah collected the ball just inside the box and nicked it past Samba, who stretched out a leg and upended his opponent.

With a languid swing of his right boot, Berbatov sent Julio Cesar the wrong way from the penalty spot for his fourth goal in successive games.

Samba inadvertently saved his side from going 2-0 behind when Brede Hangeland's flicked header deflected off his back.

But he was at fault once again midway through the first half when he attempted to dribble the ball out of defence.

Under pressure from Damien Duff, Samba lost control of the ball and presented it to Berbatov, inviting the Bulgarian striker to waltz his way into the box and slide a shot under Cesar with the outside of his right foot.

QPR rebounded with a dominant spell in which Bobby Zamora and Remy both wasted good opportunities, only for Fulham to snatch a third goal five minutes before the break.

A deft back-heel from Hangeland took John Arne Riise to the byline and the Norwegian's cut-back deflected off Hill's shoulder and into the net.

QPR were handed a lifeline when a wayward pass from Greek midfielder Giorgos Karagounis gave Taarabt the chance to run at goal.

The Moroccan held off Hangeland and fired his shot into the far corner of Mark Schwarzer's goal from the edge of the area.

QPR made an electric start to the second half, launching a series of raids on the home side's goal and winning a penalty when Karagounis clumsily tripped Taarabt.

But Schwarzer guessed the direction of Remy's spot-kick and pulled off a sharp one-handed save.

A frantic, thrilling game took another twist moments later when Remy atoned for his penalty miss. Latching on to Stephane Mbia's through-ball, he spun away from Philippe Senderos and crashed a shot home off the underside of the bar.

Suddenly the outcome of the game was in the balance with QPR sensing their chance to complete a remarkable comeback.

A rasping drive from Andros Townsend was pushed aside by Schwarzer before Samba controlled the ball brilliantly in the area but dragged his left-footed shot wide.

Remy sliced a shot after twisting past Hangeland and Zamora drew a one-handed save from Schwarzer with a fierce drive.

QPR's hopes were handed a boost with 12 minutes left on the clock when Sidwell was sent off for an ugly, late tackle on Armand Traore.

Redknapp responded by replacing his left-back with striker Jamie Mackie and throwing Samba into attack.

But, with men packed behind the ball, QPR failed to create a clear opening and Fulham hung on to take the points.

Fulham manager Martin Jol: "It was two different halves. We played much better than QPR in the first half but we gave them the present with the 3-1 and then in the second half we made mistakes like they made in the first half.

"I think we will be fine but we shouldn't have conceded a second goal and we needed our keeper again to save a penalty, but overall disappointing that after being 3-0 up we made it difficult for ourselves."

On Steve Sidwell's red card: "The red card was a bit harsh I think. I can see why the referee gave it but he was unfortunate because you could see Steve wanted to pull out of the tackle."

On whether 39 points will be enough to stay up: "Hopefully 39 points is enough but it is a tough competition, probably the only one in the world where the team in 10th could still possibly go down."