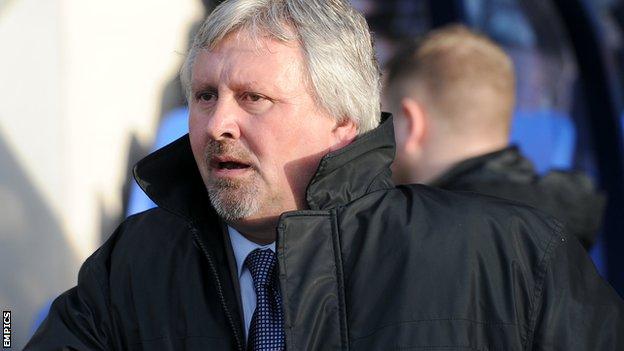 Southend United have parted company with boss Paul Sturrock, but confirmed he will return to manage the team for the Johnstone's Paint Trophy final.

In a statement, the League Two club's chairman Ron Martin said results had not been good enough and they would name Sturrock's replacement on Monday.

BBC Essex understands Phil Brown is the club's first choice to replace the Scot, who took charge in July 2010.

Sturrock will still lead the side out at Wembley against Crewe on 7 April.

"I have suggested to Paul he leads the team out and manages them at Wembley. He has earned that privilege and agreed," Martin said.

However, the new boss will take control of Southend's next two league matches - away at Bradford on March 29 and at home to Fleetwood on 1 April - before 56-year-old Sturrock makes a one-game managerial return at the cup final.

The Shrimpers reached the League Two play-offs last season and are currently ninth in the table, but they are six points behind Rotherham in seventh place.

Martin described his decision to dispense with Sturrock's services as a "very hard call, but one I instinctively know is correct".

Sturrock, who began his managerial career at St Johnstone and also had spells in charge at Dundee United, Plymouth (twice), Southampton, Sheffield Wednesday and Swindon, is the 34th boss to lose his job in 2012-13 - and 70 coaches have also left clubs this season.

But Martin said Southend's recent results against "relatively low" teams like Accrington, Barnet, AFC Wimbledon, Plymouth and Torquay had not been good enough.

"All these teams' playing budgets are considerably less than Southend United's," he continued.

"Our investment has enabled the manager to build a squad both last year and this year, having more quality players at his disposal than most teams in the league."

Martin said the board had provided Sturrock, whose contract was due to expire at the end of the season, with the finances to bring in loan signings to cover injuries, but the team's form had "dropped off".

He added that a new manager was being brought in to "ensure the club's interests are protected and advanced both now and from the first day of next season".

Brown, 53, has been out of football since being having previously led Hull City to the Premier League in 2008.

He was interviewed by Coventry City before the job was given to Mark Robins earlier this season and was also close to being appointed as first-team coach by Hartlepool United last November before talks with the board broke down.

Derby County gave Brown his first chance as manager in 2005 but it was at Hull where Brown achieved most success, leading them from the lower reaches of the Championship into the Premier League within 18 months.