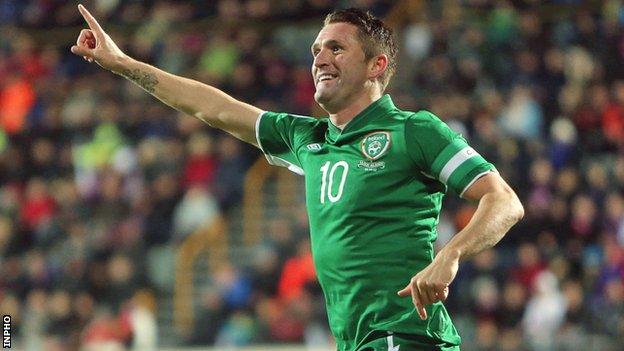 Republic of Ireland skipper Robbie Keane has been ruled out of Tuesday's World Cup qualifier against Austria in Dublin because of a calf injury.

Keane picked up the injury in Friday night's 0-0 draw in Sweden and withdrew from the Austria game following a scan.

Wolves striker Kevin Doyle has been called up to replace Keane.

Midfielder Glenn Whelan, who missed the game in Stockholm with an ankle problem, was able to train with the squad near Dublin on Sunday.

Doyle's call-up comes for the qualifiers against Sweden and Austria.

"I have been in every squad when I have been fit for seven and a half years, so it was disappointing," said the 29-year-old earlier this week.

"I feel I have always given 100% in terms of showing the right attitude and dedication with Ireland in every training session and every match.

"I will carry on doing that and hopefully get another opportunity to do that again in the future.

"It was disappointing to get the text message telling me not to travel, particularly after such a good game with Wolves."