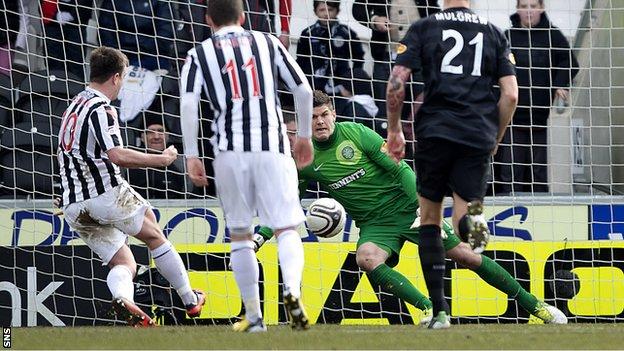 Paul McGowan's late penalty gave St Mirren a point against Celtic, who had Victor Wanyama sent off in a match overshadowed by refereeing errors.

Saints had Marc McAusland's header cleared off the line by Beram Kayal before referee Bobby Madden issued red to Wanyama for a foul on McGowan.

And McGowan levelled from the spot late on after Emilio Izaguirre was judged to have tripped Esmael Goncalves.

At least three of referee Madden's key decisions in this match were strongly disputed, with Celtic boss Neil Lennon stating afterwards it was "by far the most appalling refereeing performance" he'd seen this season "by a long, long way".

Madden missed Georgios Samaras's handball in the box; dismissed Wanyama for what seemed a soft flick at McGowan; and awarded a spot-kick to St Mirren when no touch on Goncalves was evident.

Coming away with just a point here means Celtic can still clinch the Scottish Premier League title next weekend if they beat Hibs and Motherwell lose against St Mirren.

Meanwhile, the Buddies, who move into 10th, will be glad to have got their first point and goal against Celtic in nine league meetings.

Neil Lennon's men brought mutual good feeling to St Mirren Park pre-kick-off, forming a guard of honour for their opponents to walk through in recognition of the Paisley side's League Cup triumph.

But the Hoops quickly shelved the sentimental stuff when an early Gary Hooper shot was followed by their opening goal.

Kayal's cross was only headed half-clear and Ambrose chipped the ball back for Commons to nod his 14th goal of the season into the bottom corner of Craig Samson's net.

Commons made a mess of another chance from Joe Ledley's delivery, which Celtic were nearly made to pay for when McAusland's header was cleared off the line by Kayal at the other end.

Then silky wing-play by Gary Teale ended with a tasty cross for Thompson to head wide for the Buddies.

St Mirren did have the ball in the net on the half-hour when Teale's cross from the left sailed directly in, but referee Madden decided Dummett had fouled Forster in the process.

Visiting fans sensed a second goal when Commons released Hooper however his screwed right-foot shot was not on their script.

Celtic lost Commons to an ankle injury before one final first half flashpoint when St Mirren claimed the arm of Samaras had connected with Teale's corner, but no penalty was awarded.

And with 10 minutes remaining, the home side got the equaliser from the penalty spot.

Referee Madden judged that Goncalves had been tripped on the edge of the box by Celtic's Izaguirre, but doubt existed about whether there was any touch at all.

Nevertheless, McGowan stepped up to side-foot down the middle to bring his side level.

St Mirren were almost gifted the win when Forster fumbled an injury-time cross which nearly fell to substitute Sander Puri.