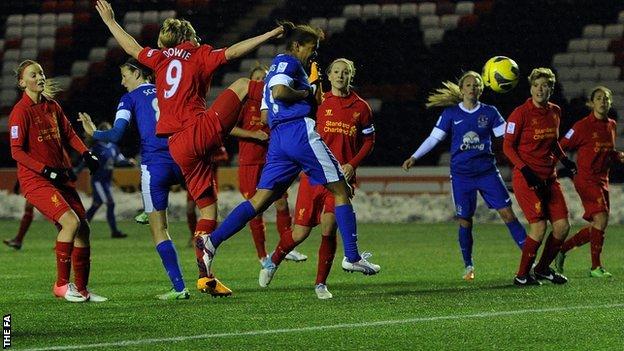 Louise Fors put the Reds ahead from the penalty spot, but striker Parris levelled four minutes from time.

The game went ahead only after six inches of snow were cleared from the pitch at the Halton Stadium, Liverpool's new home ground in Widnes.

A crowd of 1,432 turned out despite the freezing temperatures.

But the Merseyside confrontation was the only Continental Cup tie that took place as the weekend's other three scheduled games were all postponed.

Everton were rewarded with a hard-fought encounter that might have gone either way.

The Reds, who have assembled a much-changed squad for the new season, started brightly and after just seven minutes Icelandic midfielder Katrin Omarsdottir had a shot well saved by visiting goalkeeper Rachel Brown.

But Everton quickly responded, England winger Toni Duggan having a header cleared off the line then going close from just inside the penalty area.

Ten minutes after the break ex-Everton striker Natasha Dowie, one of Liverpool's 12 winter signings, had a close-range shot blocked by Brown.

And it was a foul on Dowie by Brown after 75 minutes that led to the Liverpool penalty, confidently converted by Fors.

As full time approached the Reds looked set to claim a narrow victory, but Parris rose to draw the Toffees level with a well-placed header from six yards.

Elsewhere, Chelsea's visit to Doncaster Rovers Belles and Bristol Academy's meeting with Lincoln both fell foul of the weather.

Arsenal's game against Birmingham City was put back because the Gunners' had to play a delayed FA Cup tie at Nottingham Forest.

But the weather in Nottingham also put paid to that encounter, so there is already a threat of fixture congestion for WSL clubs.