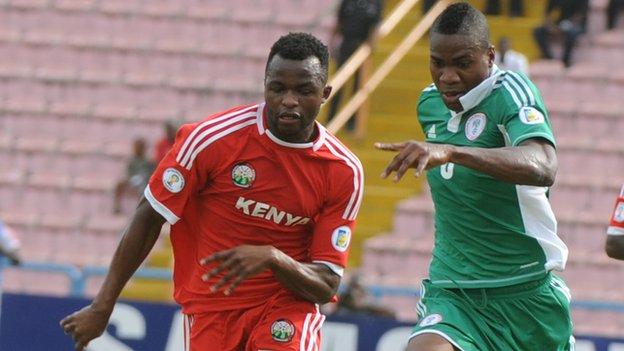 It was the second draw in three games in World Cup qualifying for the Super Eagles who have five points.

The match was Nigeria's first since their success at the Africa Cup of Nations.

The Super Eagles are level with Malawi who beat Namibia 1-0 in Windhoek.

Frank Mhango scored the goal for Malawi, whose interim coach, Edington Ng'onamo, was missing from the game. He had flown home following the death of his son,who had been suffering from cancer.

Namibia have three points from three matches in Group F and Kenya are bottom on two points.

In other results on Saturday, the Nations Cup runners-up Burkina Faso were comfortable 4-0 winners over Niger in Ouagadougou in Group E. Jonathan Pitroipa, the player of the tournament in South Africa, was among The Stallions' goal-scorers.

Group E leaders, Congo Brazzaville, made it three wins out of three with a 1-0 victory over Gabon in Pointe Noire. The QPR defender Christopher Samba scored the goal for the hosts.

Ivory Coast produced a 3-0 victory against The Gambia in Abidjan in Group C. In-form striker Wilfried Bony put The Elephants ahead from the penalty spot. Yaya Toure and Solomon Khalou also scored to complete the victory. Ivory Coast, whose talismanic striker Didier Drogba was dropped for this match, are top of their group with seven points from three games.

In Group J Senegal drew 1-1 with Angola in Conakry. The match was played in neutral Guinea because of a one-year ban for Dakar's Leopold Senghor Stadium following a riot there in a Nations Cup qualifier in October. Moussa Sow put Senegal ahead in the first half and Amandio Amaro hit an equaliser for Angola 15 minutes from time. Senegal lead the group with five points.

South Africa boosted their hopes of qualification for Brazil 2014 with a much needed victory over Central African Republic in Cape Town. South Africa were 2-0 winners thanks to goals from Thabo Matlaba and Bernard Parker. The win moves Bafana Bafana to the top of Group A.

Goals from Oussama Darragi and Wahbi Khazri helped Group B leaders Tunisia beat second-placed Sierra Leone 2-1 in Rades. Alhassan Kamara hit a consolation goal for the visitors. It keeps Tunisia's perfect record in tact at the top of the group.