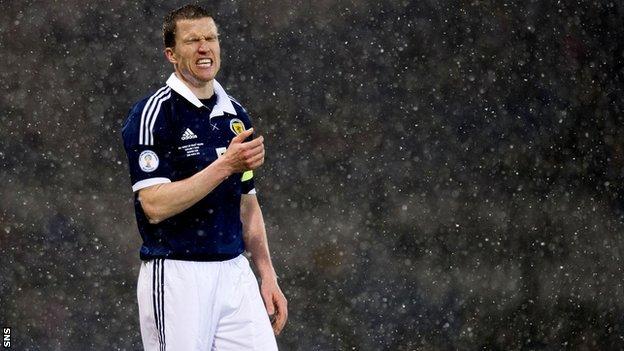 Gary Caldwell admits Scotland's chances of qualifying for next year's World Cup are "gone" but has urged his team-mates to restore pride against Serbia.

Stand-in captain Caldwell led the team in which left the Scots bottom of their qualification group.

"We, as a group, have to pick ourselves up very quickly," Caldwell told BBC Scotland. "We've got a game on Tuesday.

"We have to play for the country, the fans that come and support us."

Gordon Strachan, in his first competitive match as Scotland coach, watched on as the Welsh came from a goal down to win at Hampden.

A third successive loss following opening draws against Serbia and Macedonia leaves the Scots with only two points from five matches.

Scotland have not played in a major finals since 1998 and Caldwell insists victories are now vital to preserve their place in the fourth pot of seeds for future qualification groups.

"You can't let yourself get down," he explained. "Albeit, qualification's gone. We have to play for pride.

"We have to play to get co-efficient points that keep us in the pots that we need to be in to qualify.

"We need to be better, we've not been good enough. It's that simple. We played five games and haven't won any. As a player, that's failure.

"We have to do something about that, as a group. Not just the players that are playing now but younger players. They have to aspire to be better and to take Scotland back to a major finals.

"When qualifiers come, you have to grasp it and, for a long, long time now, we've not done that and that's failure on our part.

"It hurts us more than anyone. Obviously, it hurts fans but as players we're bitterly disappointed. It's difficult, you might never get that opportunity [to reach a major finals]."

Steven Fletcher will miss the trip to Serbia after damaging his ankle in the opening minutes at Hampden, while Robert Snodgrass is suspended following his red card.

James Morrison, James Forrest, Danny Fox and Ross McCormack withdrew from the squad prior to the Wales game.

And Strachan is without influential midfield duo Darren Fletcher and Scott Brown who are recovering from long-term injury problems.