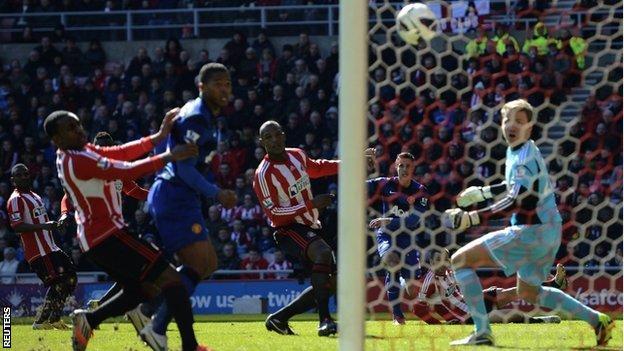 Manchester United took another stride towards a 20th league title with a comfortable victory at Sunderland.

United's first-half winner came when Robin van Persie fired in a shot from the left which flew into the net off the knee of Titus Bramble.

Sunderland never looked like breaching a United defence that has not conceded a Premier League goal in 627 minutes.

"Never mind an Easter parade, it is the victory parade for Manchester United, and one which is going to be one of the longest in Premier League history. They were far from perfect, but one goal was enough. Sunderland are well and truly in the relegation mire."

The result leaves Premier League leaders United 15 points ahead of Manchester City with eight matches remaining and a home derby against their nearest challengers to come on Monday week.

While manager Sir Alex Ferguson knows another league title is almost in United's grasp, the result leaves Sunderland boss Martin O'Neill looking nervously at the bottom end of the table, his side are only one point ahead of 17th-placed Wigan who have a game in hand.

Sunderland - with Danny Graham leading the line in place of the injured Steven Fletcher - started positively with the visitors initially looking a little unsure at the back but the Black Cats were unable to create a clear chance to test keeper David De Gea.

United, unbeaten at Sunderland since 1997, soon settled and began to seize the initiative as both teams sparred for the right to break the deadlock.

And the stalemate was broken as United took the lead just before the half hour with a goal that had an element of fortune.

Van Persie jinked past Phil Bardsley on the left side of the penalty box before hitting a low shot which first brushed against Bardsley, then deflected off Bramble before passing Mignolet.

Van Persie - without a goal for United in seven games - appeared to claim the strike but it was recorded as a Bramble own goal.

Ferguson was immediately forced into a change as Rafael limped off with a groin injury. Chris Smalling switched to right-back with Jonny Evans partnering Nemanja Vidic in central defence.

Sunderland goalkeeper Mignolet then did well to tip away a wickedly curling Van Persie free-kick as United threatened to increase their lead before the break.

O'Neill must have demanded more movement and energy from his depleted side during the interval after a lethargic first-half showing.

Manchester United are the first team in English top-flight history to win 25 of their first 30 league games in a season.

Sunderland failed to attempt a shot on target until the 90th minute (from Connor Wickham).

United looked more than comfortable but De Gea was anything but after an accidental clash with Vidic left him needing lengthy treatment.

Sunderland tried to raise their game after the break but United were happy to probe for a second goal while protecting their advantage.

Adam Johnson forced Smalling to head to safety from his nicely flighted cross, which De Gea, who was still feeling the effects of his collision with Vidic, was happy to leave his central defender to clear.

The home side enjoyed a better spell as the game entered its final quarter and O'Neill introduced Connor Wickham and Sebastian Larsson in a bid to put United under more pressure.

Alexander Buttner combined well with Ashley Young before unleashing a fierce shot which Mignolet did well to push away for a corner from which Vidic flashed a header wide.

Sunderland failed to create a decisive effort on the visitors' goal as their winless run extended to eight league matches.

While the Black Cats face a fight to avoid the drop, United will freshen up their team for Monday's FA Cup quarter-final replay at Chelsea in full knowledge that another Premier League title is within touching distance.

"We were a little bit tentative in the first half and the own goal just about sums up the way things have been going.

"I think there was a little bit of tension and a lack of confidence. We gave Manchester United a bit too much time and space when they are the best team in the league.

"We tried to do something about it and we exerted a lot of pressure though without actually creating a clear-cut chances. The players were disappointed at half time but they galvanised and it was a terrific performance in the second half."