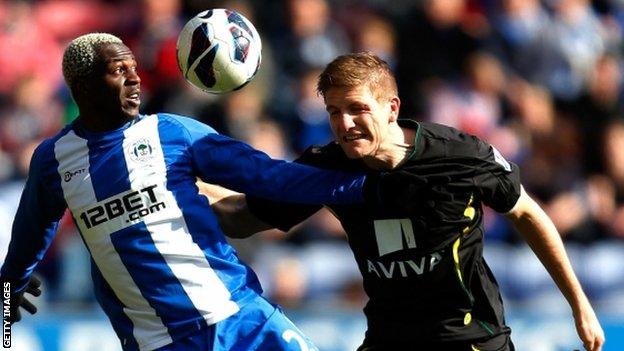 Arouna Kone's late winner moved Wigan out of the Premier League's bottom three and left Norwich only four points above the relegation zone.

The Ivorian was played in by Jordi Gomez before launching a fierce low drive that beat the dive of Canaries goalkeeper Lee Camp.

That result means the Canaries have only one victory to show for in their last 14 league games and sit on 34 points.

In contrast, Roberto Martinez's Wigan have recorded three league wins from four. The latest sees them move above Aston Villa on goal difference, with Villa playing Liverpool on Sunday.

The Latics will now go to fellow strugglers QPR next Sunday in good heart and with a strong belief that they will repeat last season's escapology act.

"Wigan are out of the bottom three. It wasn't a great game but the Latics won't worry about that"

However, for much of the 90 minutes the home team could barely string three passes together, never mind make it three successive victories.

Apart from two Kone chances - one that drifted a foot wide of Camp's post and another which was blocked brilliantly by Sebastien Bassong - they did not look like a team fighting for Premier League survival.

But with 20 minutes remaining, the Latics appeared suddenly to realise what was at stake.

First, Alcaraz tested the Norwich goal with a header that was cleared off the line by Jonny Howson and then McCarthy let fly with an angled effort that whistled past the post.

Gomez, who was one of Wigan's better players, was also denied by some more brilliant Norwich defending when Michael Turner threw himself in front of his shot.

Just as seemed as if Norwich would head back east with a 14th league draw this season, Wigan pierced the last line of defence thanks to the impressive Kone.

The Ivory Coast forward had not been served well by his team-mates all afternoon until Gomez picked him out with a threaded ball. He took the ball in his stride before arrowing a shot inside Camp's near post.

Norwich boss Chris Hughton had brought on Grant Holt seconds earlier, but he was given little time and opportunities to salvage something for his side.

"I don't think we were stylish as we normally are, but what we showed is an incredible character. Every player found a way to help the team to keep Norwich very quiet.

"To restrict any team in the Premier League to no shots on target requires massive effort. And then it was that little bit of quality at the other end.

"It seemed it couldn't quite fall for us but that's as good a goal as you're going to see in this league. The ball from Jordi Gomez was a fantastic, clinical ball, and the finish of Arouna Kone was just what he deserved for his work ethic."

"When you go away from home sometimes you have to hold your hand up if you've been beaten and beaten well but I don't think anybody seeing the game today would think that.

"We certainly deserved a draw and then it's just going to be about those moments. They had it and we didn't.

"But I thought for an away team we had good periods of the game where we had good control but it's one moment that's beaten us. It's very disappointing."