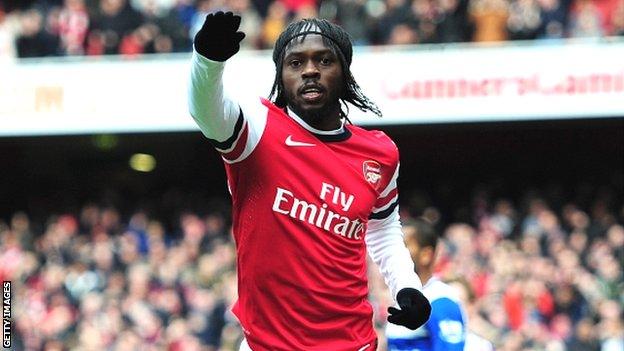 Arsenal maintained their push for a top-four finish with a comfortable victory that sent Reading bottom of the Premier League on goal difference.

Gervinho opened the scoring with a close-range finish from Santi Cazorla's cross-come-shot as Arsenal dominated.

"Reading were taken apart by an Arsenal side who are running into form. Their defeat could have been heavier and new manager Nigel Adkins will have to work hard before his side take on his former club Southampton. For Arsenal, it was a comfortable victory."

Cazorla curled in after half-time before Olivier Giroud drilled a third.

Reading reduced the deficit through Hal Robson-Kanu's header, but Mikel Arteta secured the points with a penalty after a foul on Alex Oxlade-Chamberlain.

Arsenal had many more chances to increase their advantage, but the result was never in doubt.

They stay fifth in the table but are now just two points behind fourth-placed Chelsea, who were beaten at Southampton, and four behind third-placed Tottenham, over whom the resurgent Gunners have a game in hand.

Arsene Wenger's side have won five of their last six Premier League games and their confidence was apparent against a Reading side who would have done little to impress their new manager Nigel Adkins.

The Royals host Adkins' former club Southampton next Saturday, with their chances of avoiding relegation looking increasingly slim given they are seven points from safety with seven games remaining.

Reading have conceded 61 goals this season, more than any other top-flight team, and are owners of the division's worst away record with just one win, two draws and 13 defeats.

They have now lost three times to Arsenal in all competitions this season, conceding 16 goals along the way - and on this occasion the goals against tally could have been more significantly added to.

Gervinho was their tormentor-in-chief with a goal and two assists, although he might have scored at least a hat-trick with better finishing.

The Ivorian was first to breach Reading's defence when he escaped two defenders to intercept Cazorla's drive with a neat finish.

The hosts felt they deserved a penalty when former Arsenal keeper Stuart Taylor clattered Giroud after being lobbed by the Frenchman, but referee Chris Foy dismissed their appeals.

Gervinho and Cazorla both went close to adding a second prior to the break and the pair combined again just after the restart to double Arsenal's lead.

A sweeping move saw Cazorla feed Gervinho on the right and he cut inside before teeing up the Spaniard to bend a superb effort past Taylor from just outside the area.

But just as the Royals looked capable of forcing their way back into the match, they conceded possession from a corner and Gervinho fed Giroud and the Frenchman drilled a low strike across Taylor.

Reading pulled one back as Robson-Kanu nodded home Jobi McAnuff's cross at the back post, yet that only heightened their sense of frustration at the lapse in concentration moments earlier.

Oxlade-Chamberlain came on for Gervinho with 15 minutes remaining and made an immediate impact, running at Adrian Mariappa and drawing a trip from the defender just inside the box.

Arteta wrong-footed Taylor from the penalty spot to cap a good day for Arsenal and another miserable afternoon for Reading.

"We played with good collective spirit, technical quality and went always forward. We created many chances, that's the most pleasant thing. We were quite serious. We defended well, had good discipline and didn't become easy when the game became easy.

"He [Gervinho] was always lively and created many dangerous situations. I'm sorry because in the game he had an assist, he scored but he had more chances. He lacked a bit of confidence in front of goal.

"We are in a position where we have only one target and that is to win our games, that's what we try to do. If you look around, you could lose games. We have to focus and, after, we see where we stand.

"We have a new team and know now it's a very serious time for us to get the points. The team has found a better balance maybe between attack and defence."

"I thought Arsenal were very good, they've come here and passed the ball very well. Unfortunately, we've made our own downfall on a couple of goals. We wanted to adapt a couple of changes, but any team who came here would have found it difficult today.

"We'll learn the lessons. We've only had a few days together as a group. We'll have a full week of training now. We'll analyse the game, there's a lot we want to change but we can't do it all in one game.

"We'll have a good debrief on Monday and Tuesday and get ready for the next game. There's only one way we can go and that's up.

"The lads have come a long way. We need to work hard in training, be as efficient as we can and give ourselves an opportunity in the next one."