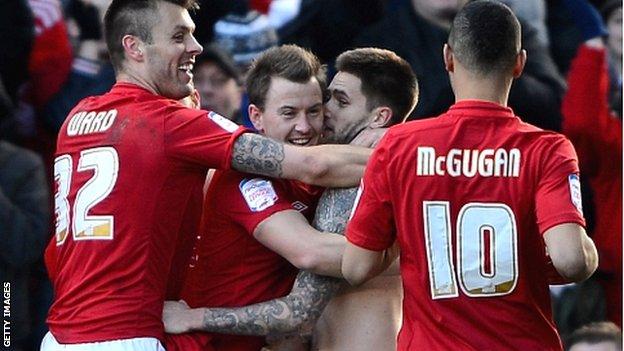 An injury-time equaliser from Henri Lansbury kept Forest in fifth place in the Championship and preserved their unbeaten run under Billy Davies.

Brighton, who moved into the play-off places with their point, went ahead as Leonardo Ulloa slotted in 12 yards out.

Substitute Lewis McGugan squeezed in the equaliser from a tight angle but Ulloa set up Will Buckley to put Albion ahead again with five minutes to go.

However, Lansbury earned a draw with a 25-shot that Casper Ankergren fumbled.

Having won six games in succession under Davies in his second spell at the helm, Forest had the better of things in the opening period, Lansbury's neat one-two with Simon Cox on the edge of the box forcing Ankergren into a parrying save after six minutes.

The Danish goalkeeper made a series of stops to thwart the home side, keeping out Radoslaw Majewski when he looked certain to score from just six yards out.

But the visitors were much improved after the break, Ulloa cutting infield from the left and curling a shot narrowly wide.

Ulloa then saw a volley headed off the line by Danny Collins after Forest keeper Karl Darlow failed to hold Andrea Orlandi's free-kick.

Forest are now unbeaten in seven matches under Billy Davies

The Argentine finally found the net when he converted a loose ball from a corner before Forest increased the pressure and McGugan conjured their first equaliser.

Three minutes later Brighton were ahead again as Ulloa controlled the ball on the penalty spot and laid it back to Buckley who placed a low shot past Darlow.

Ankergren blocked Billy Sharp's close-range effort but Lansbury's speculative effort squirmed underneath him as the points were shared.

"We got a break at the end with the second goal but we needed it in the first half when we were so much on top. Had it been a boxing match it would have been stopped.

"If we had gone in one or two goals up it wouldn't have flattered us but even though we were frustrated we kept driving on to the end. This team has many qualities but there is a great spirit in there and they were determined to get a result out of it. Even when we had got it to 2-2 we were still trying to win the game.

"We've not got the win we were looking for but we have put ourselves in a good position considering I was being asked to save the club from relegation when we came in.

"There have been a lot of strange results this weekend and they will continue in the coming weeks because that's what happens at this stage of a season."

"To begin with I thought the [Lansbury] shot must have taken a deflection but when I've seen it again I nearly killed myself!

"When you are a keeper you pay the price and Casper has done that today. He was having a very, very good game, making two or three good saves, coming for crosses and kicking very well. In training he will save a 1,000 shots like that but we wanted him to save it today.

"Goalkeeper is a terrible position to play but we lose together and we win together - at least we got a point.

"At half-time we didn't look like getting that because we were very poor in the first half. I wasn't happy but we were much better in the second half and had a very good chance to win the game ... and almost did."