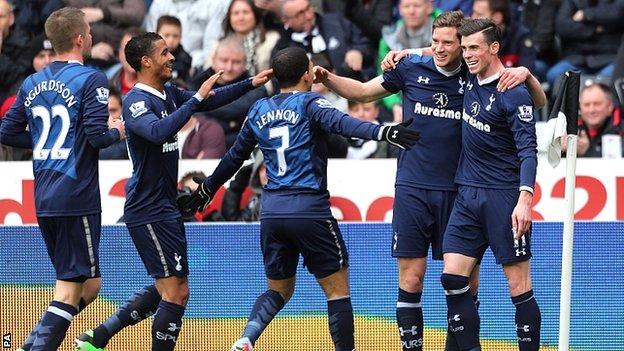 Tottenham moved up to third in the Premier League after an impressive win over Swansea at the Liberty Stadium.

Vertonghen then found Bale who fired a 20-yard shot into the top corner.

Nathan Dyer headed against the bar, and as the home side applied more pressure after the break Michu headed in off the post, but Spurs held on for a key win.

A lacklustre defeat in a seemingly routine home fixture against mid-table Fulham two weeks ago led some critics to speculate on whether Spurs might suffer the kind of malaise that resulted in only one win from nine at a similar stage last term, a sequence that, combined with Chelsea's Champions League success, cost them a place in Europe's elite club competition.

But after the international break they were bright and purposeful in possession from the outset against a Swansea side that had also lost their last two league games, and something of the fluency that inspired their League Cup triumph last month.

The first goal was beautifully started and finished by the composed defender Vertonghen, Tottenham's summer signing from Ajax.

He collected the ball on the halfway line, found Bale and continued his run as the Welsh attacker lifted the ball delicately over the Swansea backline. The versatile Belgian controlled it superbly before poking under the advancing Michel Vorm to register his fourth goal in his last five matches for the Lilywhites.

Gareth Bale has scored seven goals from outside the penalty area in the Premier League this season, more than any other player

Spurs should have doubled their lead shortly afterwards when Mousa Dembele freed Emmanuel Adebayor, but the Togolese international, who has scored only two league goals this term, shot tamely at the goalkeeper.

However, star player Bale soon put them in command with another classic strike to add to his burgeoning collection.

Vertonghen sent a cleverly disguised pass to his team-mate, playing just behind lone striker Adebayor, and after controlling the ball masterfully with his first touch, Bale fizzed it into the corner with his second, his 22nd goal of the season and his 12th away from home.

Swansea were struggling to provide suitable service for their leading scorer Michu but the skilful Spaniard eluded his markers to meet a corner, although he sent his header the wrong side of the woodwork.

The home side gradually began to play their way back into the contest and Dyer headed against the bar; but to the frustration of the Welsh crowd the ball trickled narrowly wide after rebounding back off the winger.

A quickly taken free-kick on the edge of the area soon after the interval could have given them a lifeline but Brad Friedel, starting his first league game since November in the absence of the injured Hugo Lloris, raced off his line to smother Michu's shot.

Michu then headed a chance wide following another accurate cross from the marauding Dwight Tiendalli but the striker was not to be denied his first goal since the Wembley showpiece a month ago, glancing his header from a right-wing corner powerfully past a helpless Friedel.

Having surrendered a 2-1 lead to lose at Liverpool, fresh questions returned about Tottenham in tense situations.

Bale hit the outside of the post after a trademark surging run on the break but was then required at the other end to make a vital block in his own penalty area as Spurs withstood some sustained pressure.

They return to Europa League in midweek with the first-leg of their quarter-final against Basel, but with seven matches remaining in an ever absorbing race for the top four, will be hopeful of appearing on an even bigger stage next term.

"They had a very good start but both goals showed a player of Gareth Bale's quality can make the difference.

"With the first we could have done better even if it was a good pass and finish.

"But the second goal was just a fantastic finish by a very good player. If you take Bale out, without him the teams were at the same level.

"We felt they could be tired after having so many players on international duty and in the second half we dominated, we scored one and got close, but not close enough, to a second."

"When there are so many things that go well for the team it is hard to single out individuals but Gareth is a world class player offensively and defensively, as he showed when he made the block at the end to prevent Swansea getting a draw.

"But the whole team deserve credit because coming here after two league defeats and playing the way we did is never easy.

"We spoke at half-time about trying to get the third goal to put it beyond doubt but we couldn't and they did well to come back.

"We showed great determination and the winning mentality that surrounds us to come away and hold on for a great win from home and put ourselves back on track."