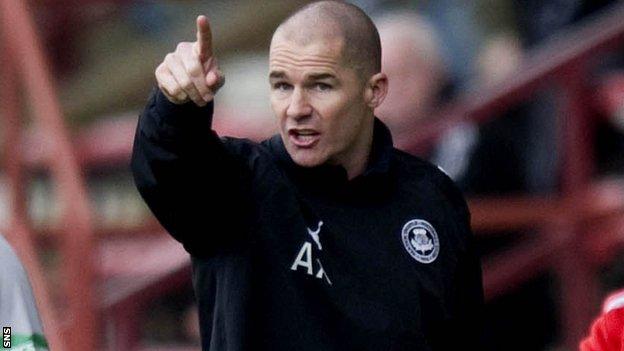 Partick Thistle have appointed Alan Archibald as their manager on a one-year rolling contract.

Archibald had previously been doing the job at Firhill on an interim basis following Jackie McNamara's departure to Dundee Utd in January.

Scott Paterson has also been officially appointed as his assistant.

"I look forward to working closely with them as we continue to work hard at providing a club that we can all take pride in," said chairman David Beattie.

Archibald recently won the First Division manager of the month award for February.

A former Scotland under-21 international, he was a product of the youth system at Thistle and made his debut against East Fife in 1997.

In 2003, the defender moved to Dundee United where he spent four seasons before returning to Firhill in 2007.

And before taking over from McNamara on an interim basis, Archibald was in a player-coach role.

Overall, he has totalled over 400 appearances for Partick and is a cult hero among the fans.

Paterson, a Jags central-defensive partner of Archibald in the past, has also had recent coaching experience at Aberdeen and Livingston.