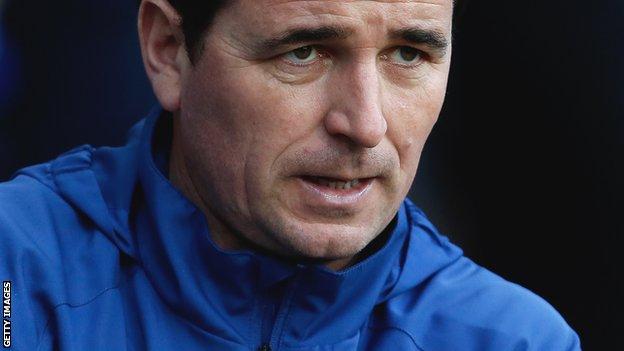 Blackburn Rovers have confirmed that Gary Bowyer will take caretaker charge of first-team affairs for the remainder of the Championship season.

It is the second time that reserve-team coach Bowyer, 41, has taken temporary control,

during his first caretaker spell.

Bowyer, who is currently on a pre-planned family break in Spain, has the backing of Blackburn's Indian owners Venky's, who believe he is the man to lift the players and lead the side clear of the Championship's relegation battle.

While sources close to the club had intimated that Bowyer had been placed in control on Tuesday, no official confirmation has been forthcoming, leading to speculation about the post.

But Rovers have now moved to clarify the position ahead of their next fixture, which is against Lancashire rivals Blackpool at Ewood Park on Friday, 29 March.

A statement released to BBC Sport read: "The club wishes to reiterate that Gary Bowyer will again take charge of the first team as caretaker manager until the end of the season.

"It is important for the club that everyone at the club and the fans once again show their support for Gary and the first team as we seek to end the season on a high note."

Blackburn, who were relegated from the Premier League in May 2012 after 11 seasons in the top flight, have struggled to maintain a promotion push and sacked Appleton having slipped to within four points of the drop zone.