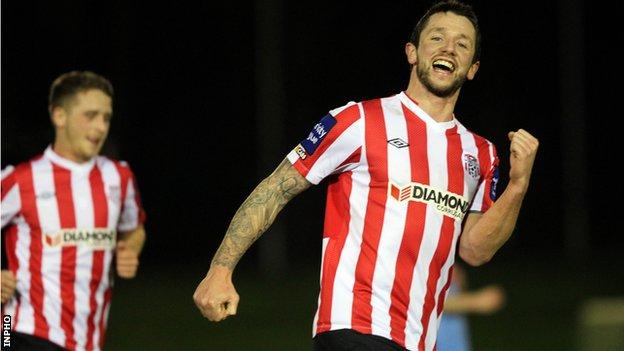 Derry moved up to second in the Premier Division thanks to Rory Patterson's late strike against Cork on Sunday.

Patterson netted on the rebound after Mark McNulty kept out his 89th minute penalty, awarded for handball against Cork substitute Adam Rundle.

Daryl Horgan fired wide for the hosts while Derry midfielder Michael Rafter went close in a poor first half.

The game improved after the break and both sides squandered chances before Patterson won it for the Candystripes.

Horgan threatened first at Turners Cross with his shot flying just wide and Rafter was also off-target with a 25-yard effort.

Cork made a bright start to the second half with Danny Furling firing wide but Derry held firm in defence.

Simon Madden fired over for the visitors on 79 minutes before Horgan slid a shot wide seconds later.

Patterson endured a frustrating afternoon before scoring the only goal with a minute left and Marc Griffin was denied by McNulty as Derry came close to doubling their lead in added time.