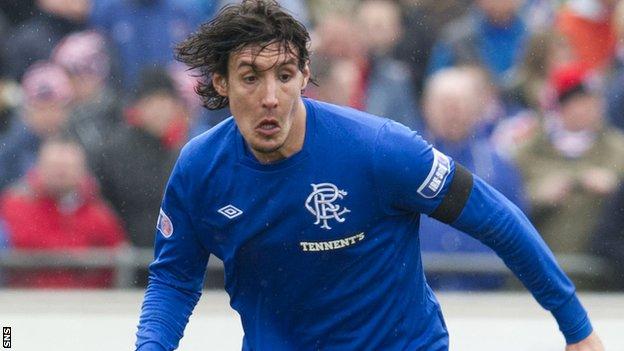 Sandaza, who signed from St Johnstone last summer, answered the call from a man claiming to be a football agent.

The striker allegedly disclosed contract details and declared himself interested in a move to another club.

"Francisco will not return to the club while the investigation is under way," Rangers said.

A club statement read: "The club, Francisco and his agent have had discussions and manager Ally McCoist also spoke with the player, who did not take part in today's training session.

"Rangers regard this is an extremely serious issue but there will be no further comment until the inquiry, which could take a week, has been completed."

When asked whether Sandaza's future at the club was in doubt, McCoist said: "I have no idea. We will have to wait to see what the investigation unfolds."

Sandaza, who netted 18 goals for the Perth side last season, also had spells with Dundee United and Brighton.