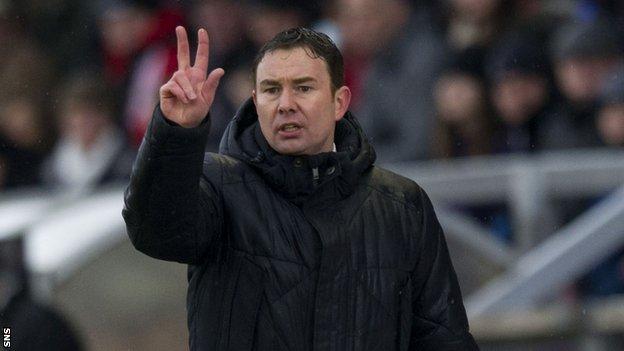 Ross County have rejected an approach by Aberdeen to speak to Derek Adams about their managerial vacancy.

The Dons have begun the search for Craig Brown's successor, with the 72-year-old retiring from management in the summer.

Aberdeen have drawn up a list of about 12 candidates to take up the managerial reins at Pittodrie.

Adams has impressed in County's debut season in the SPL, guiding the Highland outfit to fourth place in the table.

Responding to Aberdeen's interest, McGregor told BBC Scotland "it's dead" and would not welcome any further approach.

Earlier this month, the County chairman said they were keen to extend Adams's contract.

"I'm 99% sure that he'll be here next season. He's got another year on his contract and has an extension on the table," the chairman said at the time.

"It'll be down to whether Ross County are as ambitious as he is and that the board here are willing to back him in what he's trying to do with the club. I'm sure they will."

Brown, who will take up a seat on the Aberdeen board as a non-executive director in the summer, will have a say in appointing his successor.