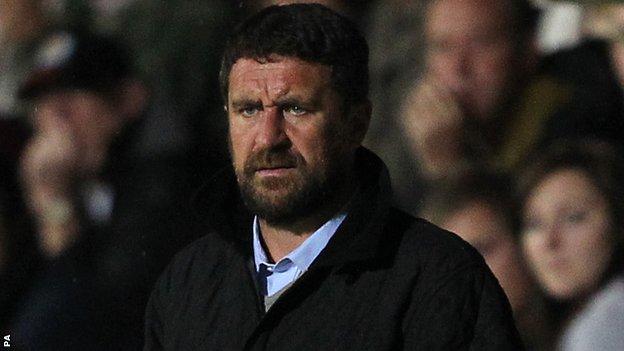 The Blue Square Bet Premier play-off final takes place on 5 May - two weekends earlier than last year - to allow the European showpiece on 25 May.

"We're condensing our season because of one game that is miles away from clubs at this level," he told BBC Radio Kent.

"It puts pressure on the football clubs with the lowest resources. It'd be alright if we all had 30-man squads."

He continued: "Everyone is having to play Saturday, Tuesday every week. Look at Gateshead - they're having huge problems fulfilling their fixtures."

Gateshead and Newport have 11 and 10 fixtures to play respectively, while the clash between the two sides on 28 March will take place in Boston, Lincolnshire because of the north-east side's pitch problems.

The Fleet are currently second-bottom in the table, six points from 20th place, and with the regular season ending on 20 April, they must play nine matches in 29 days.

Wembley last hosted the Champions League final in 2011, when Manchester City's Etihad Stadium held the play-off final between Wimbledon and Luton on 20 May.

"It wasn't long ago they played it at the Etihad and this year they haven't done it," Daish added.

"It's unbelievable that with the amount of big stadiums in this country we're still having our fixtures pulled forwards two weeks."