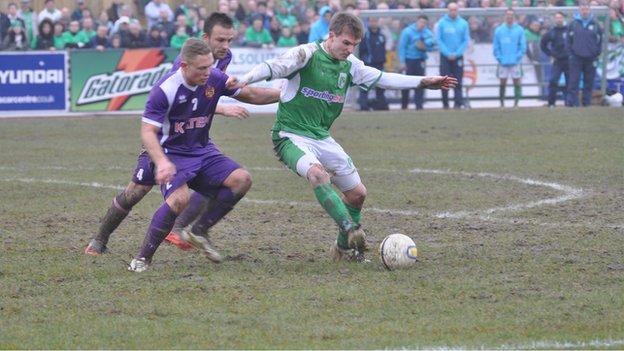 Guernsey FC face an uphill struggle to reach the FA Vase final after going down 3-1 to favourites Spennymoor Town in their semi-final first leg.

Richardson added his second after an hour and Andy Stephenson then punished a defensive error for a vital third.

In front of a Footes Lane-record crowd of 4,290, Guernsey skipper Sam Cochrane was then sent off for elbowing.

The incident, also involving Spennymoor's Gavin Cogdon, rounded off a bad day for the island side, who face a near 500-mile trip to Spennymoor for the second leg next week.

They could have few complaints as they were second best for long periods and the Northern League champions fully deserved their win.

Spennymoor brought a number of good saves out of Guernsey goalkeeper Chris Tardif and the Green Lions' defence also had to make a number of last-ditch challenges.