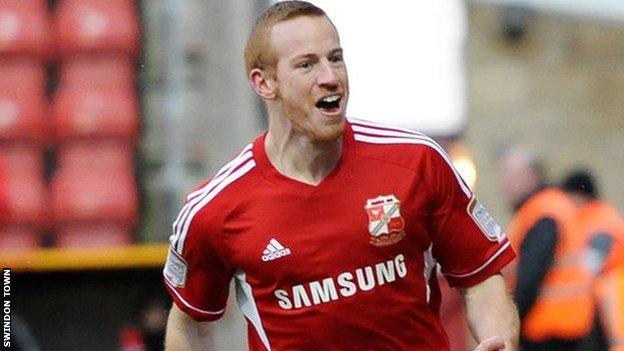 Adam Rooney's impressive overhead kick salvaged a point for Swindon in their League One clash with Oldham.

Substitute Rooney reacted instinctively to a bouncing ball in the Oldham area to net his second goal in three games.

Lee Barnard had put Oldham into the lead four minutes earlier as he fired Lee Croft's cross into the top corner.

James Collins and Rooney both had great chances to win it for Swindon, but failed to hit the target when it seemed it was easier to score.

Collins put the ball over from four yards out after 76 minutes and Rooney then did the same from a similar distance, while Collins was also foiled in a one on one by Latics keeper Dean Bouzanis and headed over late on.

Oldham had been fortunate in the first half when Andy Williams hit the post after Bouzanis saved his initial shot and even though a draw at the County Ground was a good result, it saw them slip into the relegation places, while Swindon fell from second to fourth.

"We're there again - we created a lot of chances, but didn't score them.

"Come the end of the season that might be expensive for us, but all I can say is the lads don't deliberately miss.

"At least we are creating the chances, that's the important thing.

"We've created more today, but we just didn't take them."

"It's a good point on the face of it, but I'm disappointed in one sense because we need the wins.

"There were some great individual performances. It was really positive. You can see we've come on and it's just getting to that level where we can sustain that pressure for longer periods of the game.

"They had an early chance, but apart from that, they've not really threatened. We're getting there, which is good."