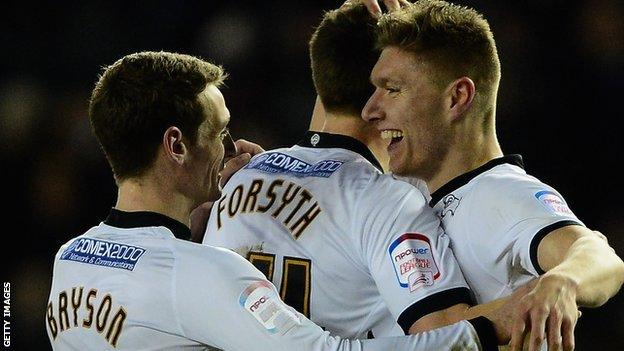 Ward missed an early penalty for Derby before Hendrick volleyed in the opener for the Rams after a poor clearance.

Bottom side City rarely threatened and Ward made up for his spot-kick miss with a driving finish after the break.

Davies added the third in stoppage time with a low strike that found the net via a deflection.

Bristol City are without victory in nine on the road, and have only pocketed two points away from home since a trip to Sheffield Wednesday on 8 December

To make matters worse for City, they have played two games more than the Owls, who sit just above the Championship relegation zone.

O'Driscoll's side got off to a bad start at Pride Park when Hendrick was hauled down by Greg Cunningham in the area. However, Ward saw his poor penalty easily saved by Robins goalkeeper Tom Heaton.

Derby's Craig Bryson managed to get past Heaton soon after but Marvin Elliott was on hand to make a last-ditch tackle.

The Rams may have little to play for as they sit mid-table, but they were the ones pushing forward and not relegation-threatened City as Paul Coutts hit the post following a cross from Conor Sammon.

The opener finally came in the 36th minute when Paul Anderson's clearance fell to Hendrick on the edge of the area and he volleyed home.

After the break, Ward atoned for his earlier penalty miss when Sammon found him and the Northern Ireland striker drove the ball past a helpless Heaton.

Derby goalkeeper Frank Fielding had a rare save to make when he blocked Liam Fontaine's header late on and moments later Davies cut in from the left to secure the win.

Derby coach Andy Garner said: "The players had a chance to recharge their batteries and they have produced a good performance. I thought we were superb from start to finish.

"When they don't go in though you start to think, 'Is it going to be one of those nights?'.

"But I think perhaps it (the timing of the break) might have been more relevant for us with a squad like ours, where a lot of the same players pretty much play week in, week out.

"In contrast now, it is a quick turnaround for the trip to Leeds on Monday."

Bristol City boss Sean O'Driscoll: "In this division, you're going to be disappointed 60 or 70% of the time - I've told the players that - but it's about how they handle that disappointment.

"We reacted well to the goals going in and our heads have not gone down, but as the game's gone on we've had a lot of possession and not done a lot with it.

"If we can react positively to making a mistake it will stand you in good stead - not just for this season but as a club moving forward. That needs to be in our DNA.

"We've had a little chat after the game and they can't let the result affect how they go about things.

"When they're running out against Sheffield Wednesday on Monday, they need to have done everything they can to be ready for it and show the spirit they've shown in the previous 13 games."