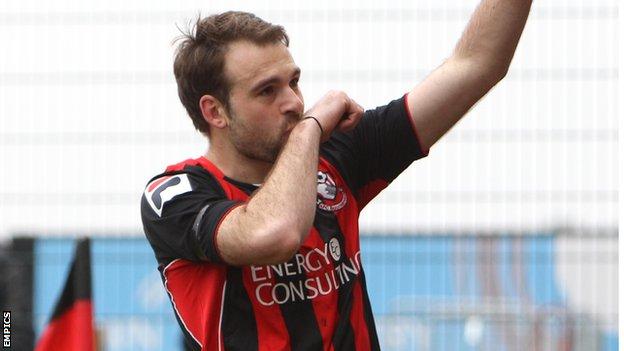 Brett Pitman scored for the fourth successive game as Bournemouth came away from Colchester with three points to move second in League One.

The Jersey-born striker's first-time shot from Matt Ritchie's low cross sealed the win and handed him his 10th goal in 13 games.

Marc Pugh could have doubled the lead before half-time but his header was deflected onto the post.

Harry Arter had two second-half chances for the Cherries but failed to score.

"I actually thought it was one of our best performances of the season. We dominated possession on a difficult surface and we created numerous chances.

"We probably weren't clinical enough with them, and that's probably the only criticism of the day, but the lads were excellent today.

"I feel we're developing as a team all the time. This isn't an easy place to come. Colchester have got some good players but we looked by far the most dominant side.

"Defensively, the back four have been very good, our goalkeeper's been good and they've been well protected in front of them. We're going to need keep clean sheets to be a successful team."