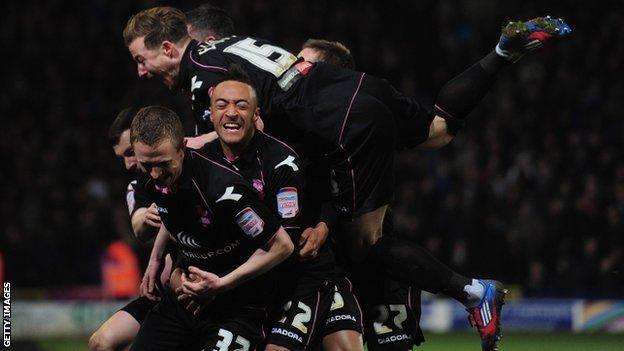 Birmingham City caused a shock with a four-goal win over promotion-chasing Crystal Palace to hand the London side their first home defeat since August.

Nathan Redmond opened the scoring with a low strike before a Damien Delaney headed own goal doubled their lead.

Ravel Morrison put Lee Clark's side further ahead after the break with a good finish from the edge of the area.

Ian Holloway's Eagles, without the suspended Wilfried Zaha, came into this game defending an 18-game undefeated home league record and looking to close the gap on second-placed Hull City.

Birmingham's only goal in their last five trips to Selhurst Park before this game was from Cameron Jerome in February 2007, and it proved sufficient for all three points

But it was Lee Clark's Birmingham, who have now lost just two from their last 13 in the Championship, who were in front in the 24th minute thanks to a superb goal from Redmond.

The midfielder collected the ball just outside the area before drifting by two defenders and angling a low shot past Julian Speroni in the Palace goal.

While Redmond's opener was delightful, there as a touch of luck about Blues' second eight minutes later as Delaney turned in Ferguson's corner as he tried to deny Nikola Zigic.

Palace came out of the second period much more lively and half-time substitute Stephen Dobbie forced Jack Butland into a superb save.

Dobbie then crossed for veteran Kevin Phillips, but the striker fired the ball wide from the back post.

Palace were left to rue those missed chances as Mitch Hancox crossed for Morrison in the 64th minute and the former Manchester United midfielder, on loan from West Ham, stuck his right boot out to put the ball into the bottom corner.

Former Queens Park Rangers and Charlton midfielder Bradley Allen: "Palace fans will not have been expecting this and they have been left devastated by this tonight. Birmingham's defence have been throwing themselves at everything."

Ferguson completed the surprise drubbing with 21 minutes remaining when the on loan Newcastle defender curled a free-kick into the top corner with his left foot.

Birmingham manager Lee Clark: "When you come to a place like this you expect it to be tough and a close match.

"It was but not in my wildest dreams did I expect the margin of victory to be that big and, in all honesty, it was fully deserved as well. It wasn't a fluke.

"We had 11 fantastic performances today. You can't come to a place like this and carry any passengers.

"We are just looking at the clubs directly above us to try and peg them back.

"We are also not being arrogant or ignorant and thinking we are out of what is going on behind us as well."

Crystal Palace manager Ian Holloway: "No one was expecting that, I certainly wasn't.

"Unfortunately I have got to deal with it right now. I think we started the game brightly, got behind them a couple of times.

"We didn't pick out the right ball, didn't get people on the end of it and then their goal seemed to affect everybody out there, which is completely unusual.

"Then they got a second one from a set piece and I was expecting a response like we did away at Watford.

"I can't remember my team missing as many balls flying across the box or making as many wrong decisions as they did out there and they've gone and scored four. That is the last thing we need but we've got to get on with it.

"We have to bounce back and deal with things better. It is simple as that."