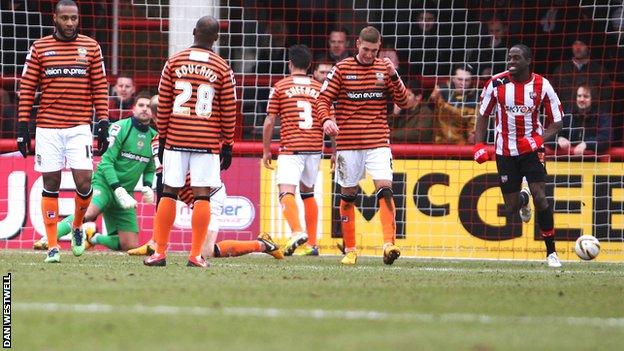 Brentford moved to within two points of the top of the League One table with a fully deserved win that all but ended Notts County's slim play-off hopes.

The Bees dominated a one-sided first half but their only goal came when away goalkeeper Bartosz Bialkowski made a mess of Toumani Diagouraga's tame shot.

Bradley Wright-Phillips ran on to Tom Adeyemi's pass to fire a second.

Notts replied when Alan Judge netted after Jamal Campbell-Ryce's penalty was saved, but the Bees held on.

The visitors, who earlier this week confirmed Chris Kiwomya as their permanent manager, pressed in the final 20 minutes and caused a few nervy moments.

But they were second best for most of the game and were unable to stop Brentford climbing up to third place, level on points with second-placed Bournemouth and two points behind leaders Doncaster - who lost to Coventry.

Brentford, who have games in hand on both of the sides above them, could have been 3-0 up by the break, but Wright-Phillips saw his strike come back off the foot of the post and Clayton Donaldson fired across goal from a tight angle.

Bialkowski's howler gifted the hosts the lead and the out-of-sorts keeper was replaced by veteran goalkeeping coach Kevin Pilkington at half-time.

Pilkington, making his 150th Magpies appearance, made a good block from Donaldson but was unable to stop Wright-Phillips running through to double the lead.

A controversial spot-kick award for a foul by Jake Bidwell on Judge gave Notts hope.

Judge followed up to knock the ball in after Simon Moore saved Campbell-Ryce's penalty.

But the Bees were able to see out a third consecutive victory with relative ease and leave Notts eight points adrift of the play-off spots.

"We gave them the first goal but Bart has been very ill. He was ill last night night and it was touch and go whether he would play.

"He wanted to to have a go but you can see he wasn't right so we took him off at half-time.

"He was struggling a bit before the game but we said, 'see how it goes'. He felt alright to go but you could see he wasn't himself.

"But he has been brilliant for us so we have no problem with him."