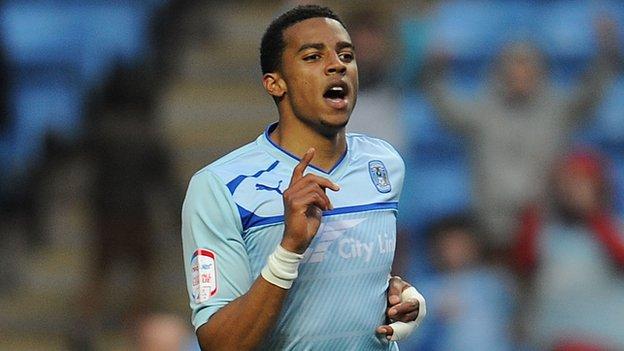 John Fleck's crossfield pass picked out the young full-back, who cut in from the right to fire a low, left-foot shot into the bottom corner on 13 minutes.

Home keeper Joe Murphy had to be at his best to keep the scores level.

Murphy turned James Husband's deflected shot round a post before denying David Cotterill either side of half-time.

Rovers' Dean Furman, who also headed over from close-range, hit the post with a 25-yard shot, while Aaron Martin made an incredible goal-line clearance from a late Cotterill effort.

But Christie came as close as anyone to a second, hitting the bar.

Coventry are out of contention, having been docked 10 points by the Football League on Friday after going into administration.

"The better team led at half-time, that's for certain - they were better than us.

"Midway through the first half we tried to make a tactical change on the field with the players.

"We did at half-time and I think it worked really well tactically and it was literally one way traffic second half.

"The result is a slight kick in the teeth for us - they're the first team to do a double over us, so they deserve some credit - but tactically we were superb second half and had some great chances."