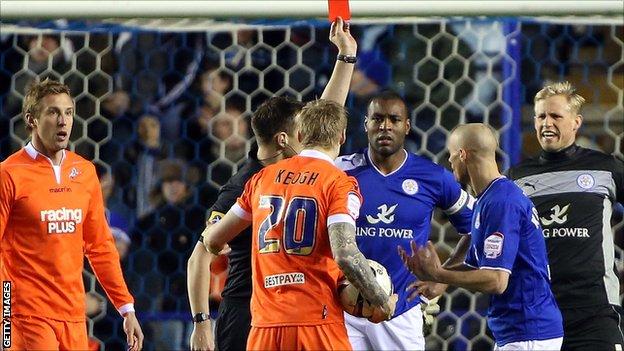 Alan Dunne scored his first goal since August 2010 as Millwall earned a victory at promotion-chasing Leicester, who had Wes Morgan sent off early on.

Alan Dunne's last league goal came on 6 March 2010, while he last scored in August of that year in the League Cup

The result means Leicester, who are without a win in six games, remain sixth on 59 points level with Brighton below them who have played a game fewer. Millwall move further away from the bottom three and are eight points above the relegation zone.

Things started badly for the Foxes when Morgan was dismissed after he brought down Keogh, who had been through on goal after reacting quickest to a long punt down field.

Schmeichel had to be alert from the resulting free-kick, superbly keeping out Lowry's effort from 25 yards at full stretch.

Leicester went close to opening the scoring but Lowry cleared off the line from Wood, before Jermaine Easter forced another fine save from Schmeichel with a fierce drive at the other end.

Paul Konchesky was then caught in possession and robbed by Rob Hulse, who fired straight at Schmeichel from a tight angle.

Adam Smith's powerful drive from distance was also at the Foxes goalkeeper. Leicester also went close when Wood's header deflected off Liam Trotter but was superbly kept out via the post by keeper David Forde.

The game looked to be heading for a draw but Dunne latched on to Richard Chaplow's cutback and his placed finish found the far corner of the net.

Leicester manager Nigel Pearson: "We've lost the game at the end because we didn't defend well. I can't really complain about the incident where Wes Morgan was sent off.

"At the moment we are having a tough time and I don't think the players deserve that but you've got to defend better than we did at the end. It was tough for us.

"We've got to stay in the play-off places, that's our aim but we're struggling to get wins and as the games run out it gets more difficult. We can't be despondent, and I can't fault the effort and desire of the players to get something out of the game."

Millwall boss Kenny Jackett: "We gave them problems early on and I don't know if we surprised Leicester with how we started.

"But we should have been a couple of goals ahead at half-time.

"It did look like it might cost us with the game petering out to a goal-less draw in the second half, but I was very pleased for Alan Dunne to score.

"To pop up and finish with such composure, to pass that into the net, it was a finish of real quality."