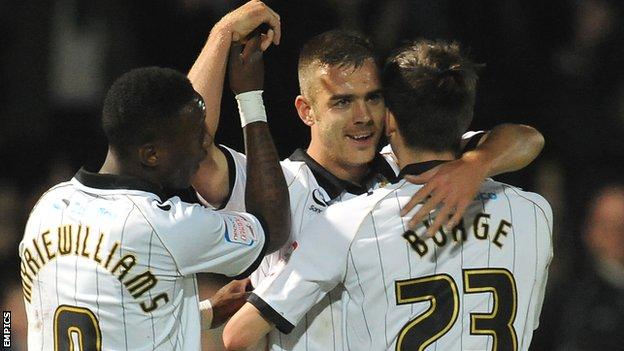 The 27-year-old, who has now scored 30 goals this season, headed home to give the hosts a deserved first-half lead.

Cheltenham equalised just after the restart when Kaid Mohamed pounced in the area, and the midfielder set up Paul Benson to make it 2-1.

But Pope volleyed home to bring Vale level, completing his hat-trick with a chip over keeper Scott Brown.

A 'Good Friday' for Pope

Before his hat-trick against Cheltenham, Tom Pope had not scored since 24 January in Port Vale's 2-2 draw with AFC Wimbledon.

Pope brought his 11-game goal drought to an end in style to keep his side second in the table, five points behind leaders Gillingham, with Cheltenham remaining fifth.

Vale got off to a lively start when Lee Hughes thought he had put them ahead, only for his strike to be ruled offside.

Pope then broke the deadlock when he found himself unmarked to nod in with ease.

Cheltenham had Brown to thank for keeping the score down before the break, the visiting keeper saving well from Jennison Myrie-Williams and Rob Taylor.

Robins boss Mark Yates made two half-time substitutions, Keith Lowe and Byron Harrison, who made an immediate impact when his parried shot fell into the path of Mohamed who slotted in.

And the visitors went ahead when Benson prodded home after Mohamed's corner.

But their lead lasted only four minutes, Pope firing in from a Myrie-Williams corner to make it 2-2, before he completed his third hat-trick of the season by beating the offside trap to poke over Brown.

"Billy Jones had a torrid time in the first half. We didn't deal with Myrie-Williams.

"We got exposed, but we shouldn't have been exposed in the first place.

"We work on stopping their wide play week in, week out, but the gap in the midfield was far too big.

"Billy hadn't got a clue if he was sticking or twisting. It was very disappointing."