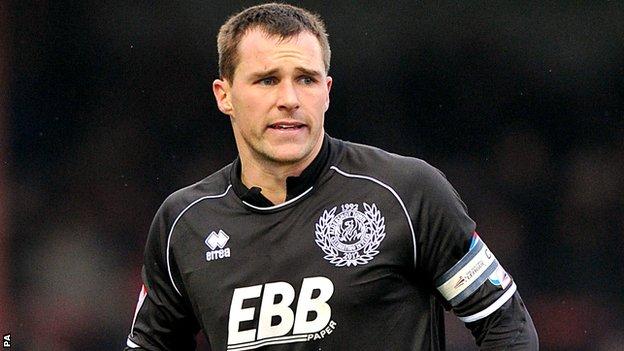 Aldershot captain Ben Herd has urged fans of the League Two club to get behind their fight against relegation.

Town are bottom of the Football League, three points adrift of 22nd-placed Accrington and winless in five matches.

Herd told BBC Radio Surrey: "I know money is tight in the current climate but if fans want a Football League club in the community we need them onboard."

"We know we've let them down this season but if we pull together we can create something special and stay up."

The Shots dropped into the bottom two after Saturday's 1-0 home defeat by Wimbledon.

We never envisaged being in this position but now there's a football club at stake. We need their support - I'm sure they're just as desperate to stay up as we are

Despite not playing on Tuesday they fell to the foot of the table after wins for all four of the sides that began the night level on points with them.

"Tuesday's results could have gone better for us but ultimately we can't do a thing about it," the 27-year-old continued.

"For me it changes nothing. We still have seven games and we need to start winning.

"It doesn't matter if the teams around us are finding form until we grasp the nettle and find our own."

Big away followings from AFC Wimbledon and Gillingham for two of Aldershot's last three home games have meant crowds of comfortably over 3,000 supporters.

However, sandwiched between those two matches less than 1,600 people witnessed the 2-1 defeat to Burton at The Recreation Ground.

"We need the fans to come out in numbers and make it as difficult as possible for the opposition," added defender Herd.

"Whatever they think about what has gone on this season they could make all the difference. We never envisaged being in this position but now there's a football club at stake.

"The fans need to be positive and come and support us because I'm sure they're just as desperate to stay up as we are."

Meanwhile Rotherham United have recalled forward Lionel Ainsworth from his loan spell with the club.

He made three starts and four substitute appearances for the Shots, scoring no goals.