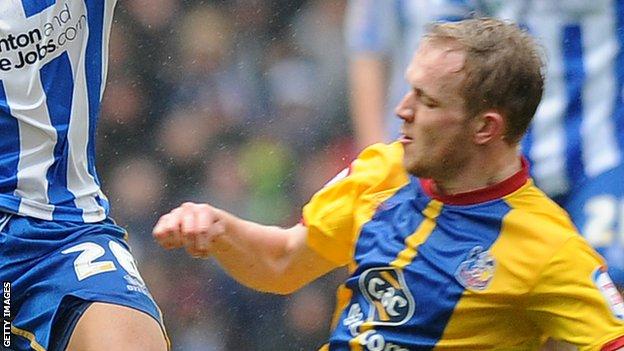 Crystal Palace's Jonathan Williams would be "shocked, but excited" to make his Wales debut against Scotland at Hampden Park on Friday.

The 19-year-old midfielder has been in three senior Wales squads, but has yet to make an appearance.

"It would be a great experience to play; easily the biggest crowd I've played in-front of," he told BBC Wales.

"I'm not expecting to start and if I don't play, hopefully I will against Croatia and if not then the next game."

Born in Pembury, Kent, Williams qualifies for Wales through his father.

I've been injured a lot the last two years so I'm just delighted to be playing again whether at left-back, central-midfield or on the wing

So far he has represented them at every youth level from Under-15 upwards and scored in last month's U21 victory over Iceland.

"I'm just waiting for an opportunity to come and can't wait to make my senior debut," he continued.

"I'd always decided I would play for Wales and when I was picked as a 15-year-old it's just gone from there.

"I've trained and played in the set-up ever since and it has really helped my development as a player."

After breaking into the Palace first-team at the start of last season, he suffered a fractured fibula whilst playing for Wales U21s and was out for four months.

Now fully recovered, the youngster has made 25 appearances for the Eagles so far this season in a variety of positions.

The Selhurst Park club are currently chasing automatic promotion from the Championship and are fourth in the table, three points behind second-place Hull.

"I've been injured a lot the last two years so I'm just delighted to be playing again whether at left-back, central midfield or on the wing," he added.

"At Palace, the support has been great from the fans and staff. Having great role-models like Danny Gabbidon around have really helped me keep my head up and accept injuries are just part of football.

"I'm just enjoying my football. We have a great chance of promotion and are really targeting that second spot."