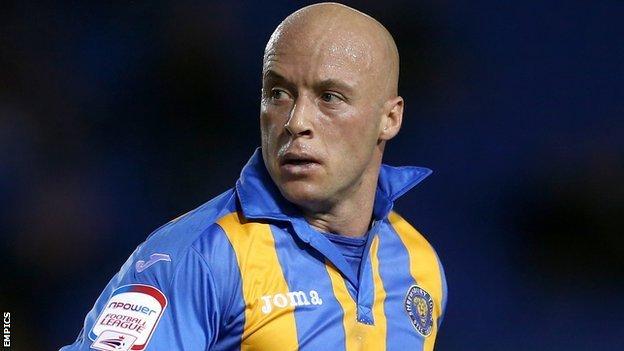 The 31-year-old, who started his career at the Meadow, returned in November, initially on loan from Portsmouth, before completing his move in January.

But he has struggled for goals, scoring just twice in 15 appearances, and has not started a game since 2 February.

According to a club statement, Rodgers and the club have come to "an agreement on the remainder of his contract at Town and he has now moved on".

Rodgers, who has also played for Crewe Alexandra, Port Vale, Yeovil Town and Notts County, spent a season in the United States playing alongside Thierry Henry for New York Red Bulls before trying his luck last summer in Norway with Lillestrom.

He hit 73 goals in six seasons in his first stay with Shrewsbury, but has not featured in the team since last month's win at Preston, having found himself behind on-loan Bolton Wanderers striker Tom Eaves in the pecking order.

Town's next game is Saturday's key League One home fixture against fellow relegation strugglers Oldham Athletic, who escaped the bottom four with a 3-0 midweek home win over Hartlepool.

Saturday's game throws up a meeting in the respective dug-outs between newly-appointed Latics boss Lee Johnson, at 31, the youngest manager in the Football League, and Graham Turner, at 65, the oldest.