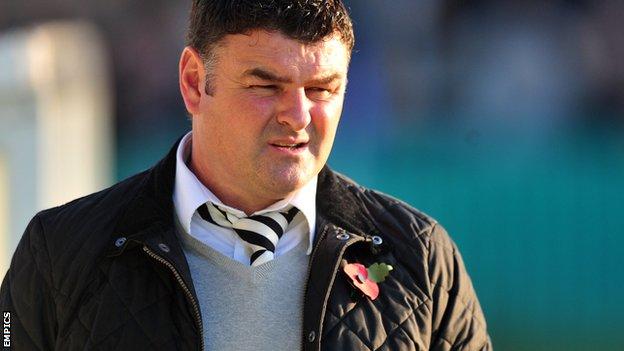 The Hatters, currently two points above the relegation zone, and replaced him with ex-Gateshead boss Bogie.

"Ian has a proven record in lower-league football and we interviewed him on the last occasion," said Lord Snape.

"We felt that if anybody can turn this club around, he can."

but his reign at Edgeley Park lasted just 12 games and 55 days before he was dismissed.

"The board have to accept responsibility - we got it wrong," Lord Snape told BBC Radio Manchester. "Kalezic has a great reputation as a manager but he didn't work out for us.

"After it was apparent that the play of the team wasn't going to improve. We had a quick telephone conference between all of us and came reluctantly to the decision that we made."

Meanwhile, Lord Snape - who revealed earlier this week that - has played down concerns about Stockport's financial position.

"There isn't a crowd of people in the wings waiting to pump money into Stockport County," he said.

"The club's board and shareholders have put in the best part of £1m since we came out of administration. There isn't a queue of people willing to do the same.

"It's a bit like turning an oil tanker around - it takes a while.

"Financially, things have been pretty grim for some years, but before any rumours start, we are happy with our financial position as it is at the moment and we hope to improve it next season."