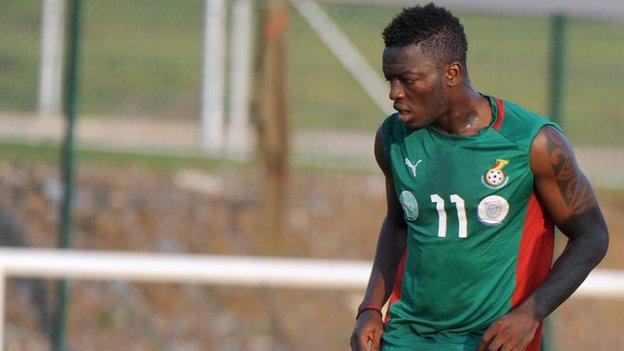 Ghana midfielder Sulley Muntari has revealed his side are "desperate" to put their Africa Cup of Nations disappointment behind them and beat Sudan in Sunday's World Cup qualifier.

The Black Stars lost to Burkina Faso in the semi-finals in South Africa and Muntari, who missed the tournament, wants to focus on reaching Brazil.

"We're desperate to get to the World Cup," Muntari, 28, told BBC Sport.

"The match against Sudan will not be easy. But we want to win at all costs."

The team is young but it is still experienced

Ghana were one of the pre-tournament favourites for the Nations Cup but suffered heartbreak when they were beaten on penalties by Burkina Faso.

Coach Kwesi Appiah came in for criticism from some quarters for placing his faith in youth and overlooking established players such as former captain John Mensah and Marseille striker Jordan Ayew, while Andre Ayew was dropped from the initial squad.

But Appiah has stuck with his policy and brought in four new faces, including Arsenal's on-loan Fulham midfielder Emmanuel Frimpong, to face Sudan.

And Muntari believes the players coming through the ranks for Ghana are good enough to help the team get the results they need aim to close the three-point gap on Group D leaders Zambia - starting with a win against third-placed Sudan.

"What happened in South Africa is just part of football and that has been put to one side now," Muntari said.

"If we think about making a statement to our fans, we won't be able to do well. But we will do our best on Sunday and try to make the fans happy.

"Our young players are playing in good leagues in Europe and I don't think they will feel pressure. We just need to train well to be fit and focused the game on Sunday.

"The team is young but it is still experienced. Age doesn't make much difference. The most important thing is that we respect each other, on and off the field - and act as a team. That will make us go far."