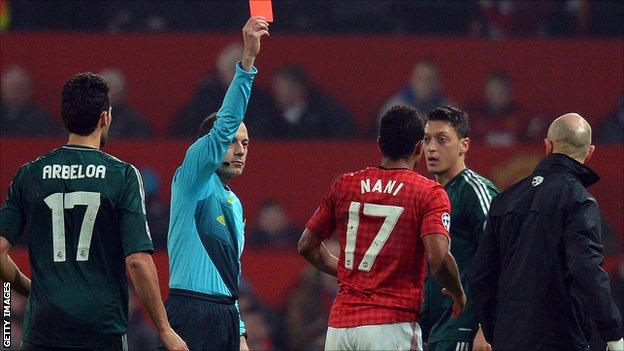 Manchester United boss Sir Alex Ferguson and winger Nani will find out on Thursday what punishment they face from Uefa, following their side's Champions League exit to Real Madrid.

Nani will get at least a one-match ban for the red card he was shown for a high tackle on Alvaro Arbeloa but could face a longer suspension.

It is an offence that can bring a touchline ban.

Ferguson was furious with Turkish referee Cuneyt Cakir over the red card shown to Nani, a decision he felt swung the tie in Real's favour.

United were leading 1-0 on the night - and 2-1 on aggregate - when referee Cakir dismissed Nani in the 56th minute.

The Spanish side scored twice after Nani's departure to win the second leg 2-1, securing their place in the quarter-finals.

Red Devils assistant-manager Mike Phelan said at the time Ferguson was too "distraught" to face the media.

Ferguson subsequently said it was "hard to keep faith" in the face of such incidents, and that it was the third time during his tenure that United had been knocked out of the Champions League as a direct result of what he felt were poor decisions.

In addition to a touchline suspension, Ferguson could also be fined or warned about his future conduct.

Defender Rio Ferdinand escaped punishment by Uefa for his conduct at the end of the game. Ferdinand applauded sarcastically in the face of Cakir at the final whistle.