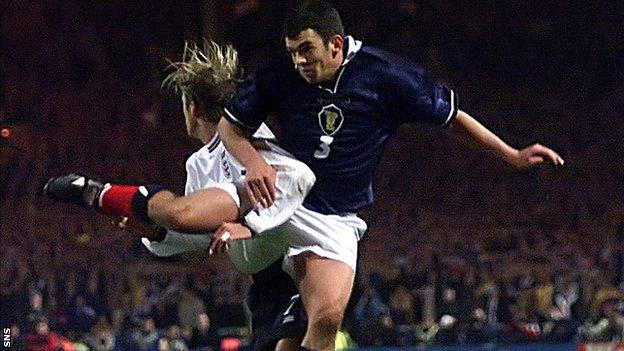 It comes from when the two were on opposing sides in the Premier League; Davidson as a left wing-back for Blackburn and then Leicester, while Strachan was managing Coventry and then Southampton.

"I never played well against him!" laughs Davidson.

"Basically, down the road, his teams were always high-tempo and in your face. That was the way he played, his style of football.

"You always knew, especially going to Coventry, with the likes of Paul Telfer, it would be really tough to play against."

Capped 19 times by Scotland, Davidson follows that back-handed compliment by explaining why he feels Strachan is the right man to lead the national side.

"I'm just delighted they chose a Scotsman and went down that route," he said.

"Gordon wanted to be the manager, which was great.

"Being the Scotland boss is not the easiest job in the world at the moment, but if anyone's going to get results and get the passion back in, it's going to be Gordon."

Strachan survived his initiation with a narrow but reasonably convincing friendly win over Estonia in February.

But the trailers are over and we're now at the first main picture - a World Cup qualifying tie with our Great British room-mates Wales.

Sitting at the bottom of Group A with a modest two points, it really is a case of the defibrillator pads being applied to ailing hopes of reaching Rio in 2014.

The last time Scotland beat one of the Home Nations in a competitive match was in November 1999, Craig Brown's men winning 1-0 against England at Wembley in the second leg of a Euro 2000 qualification play-off.

Davidson played the full 90 minutes that night, so what's the first thing that comes into his head about it - Don Hutchison's goal?

No. Christian Dailly going agonisingly close to a late headed equaliser, then?

Sorry, not that either.

"The biggest thing I remember was the two pockets of Scottish fans there who just sang and sang all game," recalled Davidson, who now plays for St Johnstone.

"Even when the game finished they kept singing. The atmosphere was brilliant.

"It was bittersweet, though, because we won but got knocked out. It was very close and we put a lot of pressure on them.

"On Friday night we're going to have to put a lot of pressure on Wales, we shouldn't allow them to dictate to us how we play.

"When we played against England it was the same kind of thing - we've got to stamp our own style of play on the game and hopefully that will happen on Friday."

Helping Strachan force matters at Hampden could be Hull City's George Boyd, Brighton's Liam Bridcutt and Dundee United's Gary Mackay-Steven, all of whom are in the Scotland senior squad for the first time.

During the second half of a seven-year stint with Preston North End, Davidson became familiar with Boyd in particular.

"He was at Peterborough and was a player who could do something - that's probably the best description," said Davidson.

"He can make something happen, which is quite a rare ability. He was a good player then and he's kept improving.

"I know a lot of people in Scotland won't know him but he fully deserves his call-up. Hopefully he can get a chance to show what he can do.

"He'll be desperate to do well because it'll probably further his career if he does well for Scotland."

Indeed, if someone like Boyd can outshine Welsh danger-man Gareth Bale on the night, they may well get freedom of the country.

Davidson is one of many who feel the Tottenham forward is producing the most consistent high performances in the whole of Britain at present.

But, Bale aside, which is easier said than done, Dunblane-born Davidson reckons the kudos gained from winning this next competitive home nation clash is massive.

"There's more pressure because you know a lot of the guys you're playing against," he explained.

"Wales are similar to Scotland, in that their squad is in quite a few different leagues - the Championship, the Premier League and the Scottish Premier League.

"There'll be a lot of team-mates; obviously the Celtic boys and Joe Ledley, they'll be playing against each other."

And with all that talk of on-field colleagues, it seemed fitting to remind Davidson that from the full Scotland team that faced Beckham and co in 1999, only he, Neil Sullivan and Barry Ferguson are still playing professional football.

"Either that or I'm just very old! Barry got in the Scotland squad at the same time as me, he was a couple of years younger - good memories."

Something to remember fondly on Friday would be nice, too, Mr Strachan.