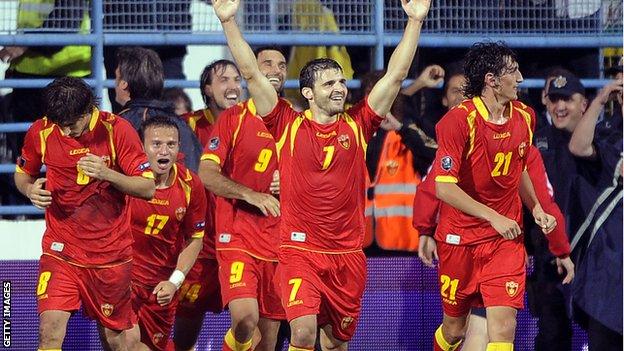 Montenegro might lie 24 places below England in the Fifa rankings, but Roy Hodgson's World Cup ambitions face a severe test in the Balkans.

Not only are the team, nicknamed the Brave Falcons, top of Group H, but no visiting international side has won in capital Podgorica for 16 months.

It all points to another tight game, just as it was when these two sides met in October 2011, a Euro 2012 qualifier that England drew 2-2 losing striker Wayne Rooney to a red card in the process.

Montenegro's recent form at the venue: Unbeaten in four games and only one defeat in the last 12

What Montenegro striker Dejan Damjanovic says about the ground: "At our home nobody takes points off us easily. Who knows what might happen if the weather is not good and the pitch will not be in perfect shape? It could help us."

What the Montenegro FA says about the venue: "It isn't Wembley," spokesman Branko Latinovic said. "But we've had a bit of rain and the pitch is in good condition and not bumpy."

England played with a tempo that the hosts struggled to subdue in the opening exchanges on their last visit to the capital of Montenegro.

That was Branko Brnovic's first game in charge but he has since stamped his mark on the team.

Having overcome a difficult start to his reign, with Montenegro losing the next three games after drawing with England, Brnovic has won over his critics with an attacking brand of stylish football.

Goals have not been in short supply, the Brave Falcons scoring 11 in the last four matches alone. And Brnovic's popularity has risen since he called up a string of young players, with Partizan Belgrade defender Vladimir Volkov particularly catching the eye.

The midfield will be without Milorad Pekovic, 35, who was sent-off in Moldova on Friday, with Stevan Jovetic and Mirko Vucinic, who ply their trade in Serie A, expected to lead the attack.

Miodrag Dzudovic, the victim of the kick that saw Wayne Rooney sent off in that Euro 2012 qualifier, appears unlikely to start.

Vucinic is enjoying a healthy season for club and country. The 29-year-old striker has played his part in propelling Juventus into the Champions League quarter-finals, while he has also contributed seven goals during his club's rise to the top of Serie A.

Can the former Roma player surprise England? "We are a team without stars in terms that we don't have anyone who thinks they are better than anyone else," said Montenegro Football Association spokesman Branko Latinovic.

Brnovic, whose playing career included spells in Spain with Espanyol, took charge after Zlatko Kranjcar was dismissed in September 2011.

After a difficult start, which included a 3-0 aggregate defeat to the Czech Republic in the Euro 2012 play-offs, Brnovic has steered Montenegro on an eight-match unbeaten run prior to England's visit.

That sequence included an impressive 1-0 away win against Ukraine, arguably the highest-profile scalp in the country's short football history.

"We prepare for each game the same whether we're playing San Marino or England," he said.

That approach has been rewarded. Montenegro were unbeaten throughout 2012 under Brnovic, who at 45 is 20 years Roy Hodgson's junior.

Not that Brnovic is allowing himself to relax after a fine run. "We must prove ourselves on the pitch, not in facts and figures," he said.

MOOD IN THE CAMP

Far from worrying about England's visit, striker Dejan Damjanovic says Montenegro are relishing Tuesday's test. "We know England have individual players much better than us, but we must play to a maximum level and maybe with our supporters we can produce some miracle," said the FC Seoul player.

Damjanovic added: "Everybody knows England are the best team in the group, but we will not give up. Nobody expects us to take three points, but we want to give a good performance. If we give our maximum and we have some luck then maybe we can have a good result."

Simon Vukcevic is a name Blackburn Rovers supporters are familiar with.

Having been part of the side relegated from the Premier League at the end of last season, the 27-year-old former Partizan Belgrade midfielder started this season in the Championship before having his contract terminated by mutual agreement at the end of January.

Forward Vucinic is a regular starter for Juventus while Fiorentina's Stevan Jovetic, 23, has been heavily linked with a move to Arsenal.

This is the third meeting between the two countries, with the previous two ending in draws. An England team skippered by Manchester United defender Rio Ferdinand was held to a goalless draw at Wembley in a Euro 2012 qualifier in October 2010 before the 2-2 draw in the 2011 return.

The Montenegro national team only came into existence after the 2006 World Cup, and failed to make the 2010 finals after managing one win in 10 qualifying matches in a group that saw Italy and the Republic of Ireland advance to South Africa.

Their results during the 2014 qualifying campaign are proof of a marked improvement, with home and away victories against San Marino and an impressive away win to Ukraine. Brnovic's side also drew 2-2 with Poland.

Water polo, basketball, volleyball and handball all rival football as the most popular sports in Montenegro

A COUNTRY READY TO CELEBRATE

"It would be the biggest sporting achievement in the history of our country," said Latinovic, when asked about the prospect of qualifying for Brazil in 2014.

"The women's national handball team won Montenegro's first ever Olympic medal in London last year, but football remains extremely popular, and we had 40,000 requests for tickets for the England game.

"The result in this game won't define anything, but everyone wants to watch this match."